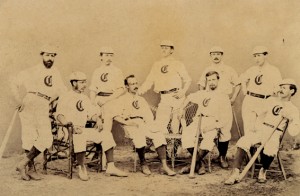 At the time, it was the cornerstone of baseball’s centennial celebration, a much heralded, fan-driven promotion designed to get everyone involved with the festivities.

It was 1969, the centennial of professional baseball, 100 years since the Cincinnati Red Stockings started paying salaries for playing ball.

Major League Baseball was just embracing serious marketing and licensing concerns. Major League Baseball Promotion Corporation was founded. An alignment with Licensing Corporation of America was in the works. BBD&O advertising was aboard to lend creative talents. Bowie Kuhn, the new acting commissioner was ready to wake up the sleepy game of baseball in its first year of division play, and was talking to Gillette about underwriting fan voting for the All-Star starting lineups the following year.

In 1969, the U.S. Postal Service issued a stamp commemorating 100 years of professional baseball.

But first, there was the centennial to mark, with a Nixon White House celebration, an All-Star Game in Washington, a poster, a US postage stamp, and a record album narrated in part by Jimmy Stewart.

A special logo to be worn on all uniform sleeves and that patriotic looking logo remains the MLB logo today – the batter who looks a lot like Harmon Killebrew, but isn’t. (That, according to the designer, Jerry Dior).

And the cornerstone was to be the selection of baseball’s all-time teams – one covering all of baseball history…greatest players ever, and one for “living players.” Individually, each team was to have its own poll for its own all-timers and “greatest moment ever.” (I don’t remember what the Montreal Expos and San Diego Padres did, as they were only in their first months of play).

I was in my second year in the Yankees public relations office, and with our senior executives all in Washington for the White House visit, Sheraton Hotel Greatest Players Dinner, and the All-Star Game, I was charged with distributing – on behalf of the Commissioner’s Office – press kits unveiling the greatest players. I had to take the kits to the wire services and the New York City newspapers, where they were embargoed for a certain hour so that no one would have it first. (Without me, I suppose, this would not have been a story at all.)

This must have been a huge event for baseball because I was told to take cabs to the various media offices, not the subway. So I knew I was carrying hot stuff with me.

The release would coincide with the formal announcement, made at a huge dinner at the Washington Sheraton Hotel on the Monday night before the All-Star Game. (The game itself was actually rained out and played on Wednesday). Celebrities, including George Plimpton and Astronaut Frank Borman read the names of the winners, who were selected by baseball writers and broadcasters after nominations from fans through their hometown teams.

Not only was this a feel good event for baseball – it came on the day after Neil Armstrong and Buzz Aldrin walked on the moon, and everyone was in a great celebratory mood in Washington and across the country. July 21, the day of the banquet, was the day Apollo 11 left the moon to return to earth. The President, watching on TV in the oval office, did not attend the dinner.

Today, not only is the announcement of the greatest players generally forgotten, it’s almost impossible to research! Even the 1970 Sporting News Guide failed to list the teams, and that was a very well prepared annual historic guide written with future researchers in mind.

I’m pretty sure you have heard about the announcement through this: Joe DiMaggio always insisted on being introduced as baseball’s Greatest Living Player.

That is where this came from – the announcement that July night. 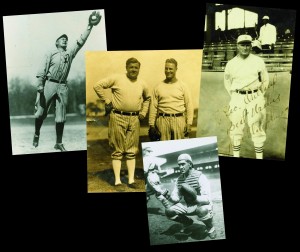 In any case, let me delay no further in refreshing your memory. The greatest all-time team included Lou Gehrig at first, Rogers Hornsby at second, Honus Wagner at short, Pie Traynor at third, Babe Ruth, Ty Cobb and DiMaggio in the outfield, Mickey Cochrane catching, Walter Johnson as the right handed pitcher, and Lefty Grove as the left handed pitcher. John McGraw was the manager. 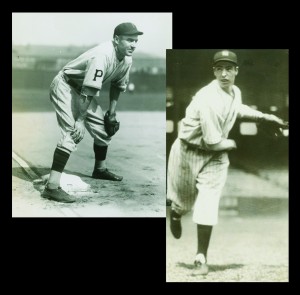 In addition to being named as two of baseball’s greatest players of all time, Pie Traynor and Joe DiMaggio also made the list as the” greatest living players” in 1969.

With the passage of time, 44 years in fact, there are some interesting observations to be made from these selections.

One thing that jumps out is how Pie Traynor’s stock seems to have fallen. The number one third baseman on both lists would be recognized by very few young fans today, and might have trouble making the top ten if such a vote was cast today.

It is also interesting to see DiMaggio on the all-time team having surpassed Tris Speaker, whom most old timers held sacred, both for his defense and offense, as the middle outfielder between Ruth and Cobb. Speaker’s time was now over. 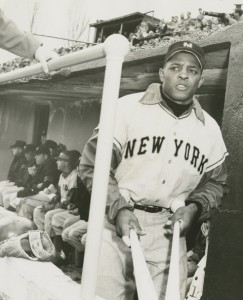 In the great debate of who was superior — Mickey Mantle or Willie Mays — even Mantle acknowledged that it was Mays who had the better career.

On the living team, this would surely have been the moment that Mays over Mantle stirred hard feelings in New York. But even Mickey would come to acknowledge that in the end, Mays had the better career. Mantle, just four months after his retirement announcement, was at the peak of his popularity, but the memory of four rather ordinary final seasons was very much on people’s minds.

The selection of Cochrane at catcher could be seen as putting an end to the debate over Cochrane, Gabby Hartnett, Roy Campanella, Yogi Berra and Bill Dickey. Today, Johnny Bench and Mike Piazza would be part of the discussion. Cochrane’s supremacy prior to Bench’s big years is noteworthy. Also, Dickey winning over Berra would probably not be the case today if both were living.

Little thought seems to have been given to the Negro Leagues, where Satchel Paige and Josh Gibson stood above all others. The Hall of Fame did not embrace the Negro Leagues until two years later.

I recall some chatter at the time about a few of the living selections being “cooked.” Cronin, a lifetime .301 hitter, may well have deserved the nod as greatest living shortstop, (over Luke Appling, Pee Wee Reese, Phil Rizzuto and Lou Boudreau), but one suspects that the baseball powers pre-ordained that he would emerge on top – given that he was the reigning American League President and a key figure at the White House event.

Likewise, one wonders now if Sisler won at first base but Musial, who was the head of the President’s Council on Fitness and Sports, was slipped in to create a tie.

Grove, the greatest living left-hander over Sandy Koufax? So it was decided, and with merit. (Bowie Kuhn liked to talk about Grove during the White House visit, pulling over some 19th century chair and plopping his feet on it as he relaxed).

A vote today would surely include a relief pitcher and perhaps a designated hitter. Jackie Robinson might find a spot on the team, perhaps with a little prodding from baseball officials. 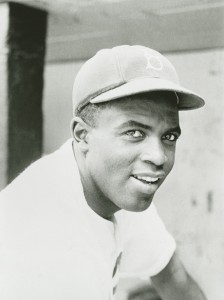 If a poll was taken today to determine the greatest all-time team of the national pastime, it is likely that Jackie Robinson would be included in the lineup.

There will come another anniversary – there are always anniversaries – and a chance to have another vote. But the takeaways from the 1969 vote were that 1) It was, in a sense, the debut of modern marketing for Major League Baseball, not yet known as “MLB”, 2) the event gave DiMaggio 30 years of introductory commentary, which he greatly enjoyed, and 3) so seemingly important at the time, but not even worthy of the 1970 Baseball Guide.