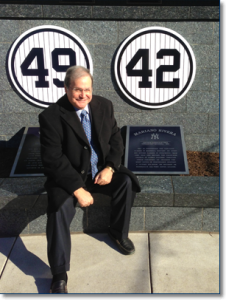 Marty Appel, an “accidental Yankee fan” (“I was born in Brooklyn!”), has been cited by the New York Times as one of the nation’s premier authorities on Yankee history, and is generally acknowledged as one of baseball’s most informed historians. Indeed, a private library of more than 2000 baseball volumes is one of the largest private collections in the country.

Marty Appel Public Relations was incorporated in the State of New York in March 1998, but the foundation for the company goes back to 1968, when Appel joined the public relations staff of the New York Yankees.

With over 30 years of contacts and skills, the company today serves a range of clients, largely in the world of sports but also in publishing, education. consumer products, medicine, and not-for-profit.

As a major boutique agency based in the communications capital of the world, Marty Appel Public Relations affords clients the benefit of experience, attentive service, and hands-on management from one of the nation’s best known practitioners of the art of communications.

Appel, for over two decades a collaborator on the plaques that hang in Cooperstown, was also co-author of books with Thurman Munson, Lee MacPhail, Bowie Kuhn and Tom Seaver. Through his public relations company, he handles Yogi Berra and the Yogi Berra Museum, as well as Topps, Leland’s Auctions, The Sporting News and other Yankee-related accounts.