(4/17/09) — On Opening Day of the refurbished Yankee Stadium, April 15, 1976, it was nearly 90 degrees and of course, I had overdressed, deeming it appropriate to wear a suit and tie on this formal occasion. I was the PR director; I was the guy on the field trying to make order out of 50 photographers and a long list of VIPs, coordinating the introductions with hand signals to Bob Sheppard in the PA booth. All of my “assistance” from stadium security had vanished, dispatched to Mr. Steinbrenner’s office for his pregame party. 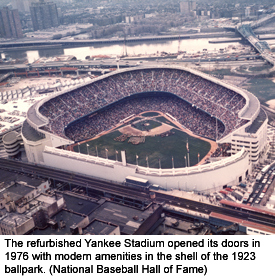 So there I was, alone on the field with Joe Louis, Joe DiMaggio, Mickey Mantle, Yogi Berra, Whitey Ford, Frank Gifford, Kyle Rote, Johnny Unitas, Weeb Ewbank and others with Stadium pedigrees. Bob Shawkey, who pitched the 1923 opener, was on hand to throw out the first pitch, and he was surrounded on the mound by Mel Allen, the legendary “Voice of the Yankees;” by Pete Sheehy, the kindly clubhouse manager who had been there since 1927; by Toots Shor, the restaurateur whose eatery had been a second home to so many athletes; and by James Farley, former postmaster general, head of the Democratic Party, Haverstraw, N.Y. amateur baseball player, and season-ticket holder since ’23. Whitey Witt stood at the plate — he was the first Yankees batter in ’23.

Although recent publicity has called the remodeled Yankee Stadium inferior to the original, at the time, almost everyone had glowing approval for the project. Escalators, a video-replay scoreboard (which didn’t work on Opening Day), no obstructed-view seating, modern-dining facilities, luxury boxes and a new sound system all had kicked the aging park into modern times. The façade design, not yet held in iconic status as it is today, graced the top of the bleacher billboards. There wasn’t seating in the left-field bleachers until it was hastily installed prior to the ’76 ALCS, and thus the attendance of 54,010 was less than the eventual capacity.

These thoughts were in my mind as I boarded the crowded D train at Columbus Circle for the 15-minute trip to the Bronx. Today, you can always tell when it’s the right train, because everyone is wearing Yankees clothing — caps, Jeter T-shirts, etc. I always remember George Weiss, the GM in the ’50s, supposedly pounding on his desk in front of a promotion man who was touting Cap Day and saying, “Do you think I want every kid in this town walking around in a Yankees cap?” As if it would be sacrilegious.

Upon emerging from the subway Thursday, I the first view is not of the beautiful new Stadium, but of the old one, over there to the left, experiencing the early stages of demolition. I was very emotional when I attended the final game last September, and this is yet another tug at my heartstrings. Sledgehammers are doing their jobs along the bleacher walls, and within the next few months, the concrete will be down, and the reality will really set in. I’ve been going there since 1956. This is tough to see. 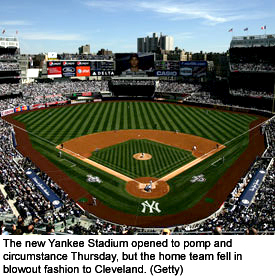 I was early enough to take a full walk around the new park. There are no statues, as other teams have included, but plenty of signage and banners remembering great Yankees: Ruth to Gehrig to DiMaggio to Mantle to Munson to Murcer to Jackson to Mattingly to O’Neill to Williams to Jeter to Rivera to Sabathia. Yes, to CC. Hey, he was going for his second Yankees win Thursday! And the first rule of promoting your product is to promote the current product more than the old.

It’s nice that Babe Ruth Plaza not only remains, but is also enhanced. It used to be just three words in broken tile in a patch of concrete breaking up traffic flow on 161st Street. Now it has a more formal presence, as the outside of the first-base/right-field side of the stadium. The inside complement is called the Great Hall. (I might have named it the Grand Concourse, after the nearby Bronx street.)

Everyone is in a festive mood, and there had been rumors in the last 24 hours of not Yogi, but of President Obama — or of Archbishop Dolan, newly installed just Wednesday, handling the honors. The paper this morning said it would be Yogi, which is just fine. He has been a loveable figure in this town since his 1946 debut 63 years ago. How do you stay so lovable so long? You have to be the real deal, and he is. He’s the most honorable, honest and genuine person you could ever know. It is wonderful that he is still with us, just short of 84, to perform this honor. Although he does move closer to home plate with each ceremonial toss!

I arrived about two hours early and spent a lot of time photographing exterior shots. I decided that the crossing of 161st Street by hundreds of fans coming off the subway will take on the look of a Yankees fashion parade in no time. And just a few days after New York’s traditional Easter Parade! It’s quite a sight to see this sea of Yankees blue swarm across the street towards Babe Ruth Plaza.

I’m in Section 212, sitting with Jeff Idelson, my pal for almost 20 years and the president of the Hall of Fame. Like me, Jeff is a former Yankees PR director. The late Anne Mileo was secretary to us both, and it’s a good day to remember Anne as well. 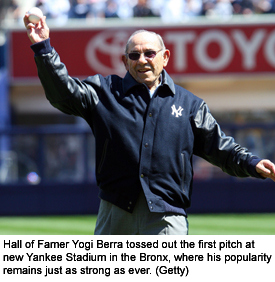 After receiving an Opening Day pin (sure to be a collectors item), I continued taking photos inside, thinking, “What would we be wanting to see of 1923′s opener if we could?”

So I shot concession-stand price signs, the restaurants, the signage and the museum, complete with all its signed baseballs, statues of Yogi and Larsen and the World Series trophies since 1977. I took a photo of the signed baseball of journeyman catcher Sal Fasano, one of my son’s favorite players, and wondered why I have no recollection of Frank Tanana ever being a Yankee.

The opening ceremonies were less tear-evoking than the final game last year, but still a marvel. John Fogerty sang “Centerfield” (love it), Bernie Williams did “Take Me Out to the Ball Game” on guitar (love him) and Kelly Clarkson performed the national anthem. (She is a different person than Carrie Underwood, right?)

The old timers introduced were a mixed bag of memories — good for the Yankees to invite the much-maligned Horace Clark, and how good it was to see Jerry Coleman, Whitey Ford and Bobby Brown, who, beside Mr. Berra, were the senior citizens. The biggest hands were for the more recent players — Williams, O’Neill, Tino Martinez, David Cone, etc., probably because younger fans cheer louder. Some of my favorites were there: Bobby Richardson, Moose Skowron, Ron Blomberg, Luis Arroyo, Ralph Terry and Bob Turley. (I guess we’ll never see Jim Bouton at such a gathering.) I wish Gene Michael had received a louder ovation, if only for what he meant as a super scout in the early ’90s, building the Yankees dynasty of that decade. 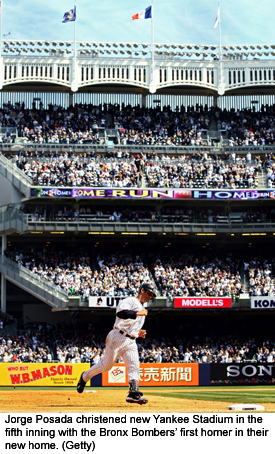 To me, with a public-relations background, much of a fan’s experience should be about how many cheer moments their day at the ballpark provides. For example, I was at the first exhibition game on April 3 against the Cubs. Jackson threw out the first pitch. I think the fans would have gotten a chill if the PA announcer had said, “And joining Reggie for the ceremonial first pitch … one of his teammates from those great Yankees teams of the ’70s … one of the most popular players to ever wear the Yankees uniform … here today as the manager of the Chicago Cubs … a warm Yankee Stadium welcome for … Lou Piniella!” It would have been a terrific moment.

Jeff and I then sat back and enjoyed a baseball game as two old friends should. We commented on Sabathia’s high pitch count and rolled our eyes at the leather-lunged fan ahead of us who chose to stand and yell “hip hip …” on every pitch to Jorge Posada, so that everyone would follow with “Hor-HAY!” Wasn’t it a supernatural act, that when Posada hit the first home run in the new ballpark, our hero was off in the men’s room or somewhere and missed it?

Jeff and I shared a lot of observations about the minutiae of the place — the placement of the monuments, the retired numbers, the out-of-town scoreboard, even whether the PR department was correct to omit the 1974 opener at Shea Stadium in the media packet that included Hilltop Park, the Polo Grounds, the original Yankee Stadium and the remodeled Yankee Stadium. (We thought Shea belonged.)

When the Indians got nine runs in one inning, the fans started to yell “We want Swisher!” after Nick had pitched a shutout inning in the 15-5 loss Monday. That was pretty funny, and I hope Nick heard it in right field. 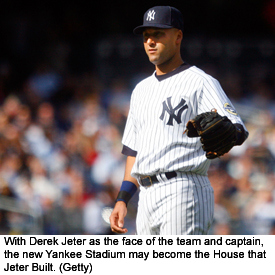 Yankee Stadium traditions continued — YMCA, three-card monte, the subway race, Ronan Tynan doing “God Bless America,” the bleacher bums’ roll call, and of course, the captain, Derek Jeter, being The Man. The fans love him, and he’s worthy of it. As Mantle had been a hero to me, and then Don Mattingly to my son, it’s wonderful that someone like Jeter has come along for this generation. Baseball perpetuates itself.

It was a Yankees loss, but every team is going to lose 60 games, so you sort of put that aside and move on if you’re a Yankees fan. Posada hitting the first home run was big. The ballpark is a winner. And watching the game with a friend is the best part of it all.

After the opener at new Yankee Stadium, the following items were donated to the National Baseball Hall of Fame and Museum and will soon be on display in Cooperstown: a game-used ball signed by Indians starting pitcher Cliff Lee, the spikes worn by Yankees starting pitcher CC Sabathia and the bat used by Indians center fielder Grady Sizemore to hit a seventh-inning grand slam.

Marty Appel is a special contributor to the National Baseball Hall of Fame and Museum.