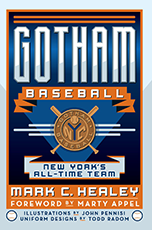 All of Mark Healey’s choices in this book are wrong.

There, I said it.

I said it because as I read the book I thought of the great sports columnist and author, the late Leonard Koppett, the smartest person I ever knew.  Lenny liked to enter a room and say, “What are we talking about?….I disagree.”

And sure enough, he was brilliant enough to take either side of an argument and win the day with his logic.  If you said, “Lincoln was a pretty good president”, Lenny could convince you otherwise.  Or vice versa.  He was brilliant.

So I was thinking of Kop as I reviewed Mark’s choices, thinking how much he would love to participate in, or create, a good debate….and then I reminded myself, “that, my friend, is the fun of sports.”  And this book accomplished it.

This business of choosing “my guy or your guy” surely goes back to childhood debates on the sidewalks of New York when Yankee fans and Giant fans would argue Lou Gehrig or Bill Terry as the best first baseman in town.  In fact, in the early 1920s, fans were still putting Hal Chase, the notorious New York Highlanders first baseman, in the discussion.  He may have thrown a game now and then, but he had his supporters.  He was handsome and had a swashbuckling style that connected with fans attracted by players with a touch of the notorious.   The bad boys.

In my childhood, the Brooklyn Dodgers finally got good, and the argument covering center field went three ways – the Dodgers’ Duke Snider, the Yankees’ Mickey Mantle, or the Giants Willie Mays.  Oh how those debates mattered, and how they tested one’s abilities at argumentation and debate, qualities that would stay with a person for the rest of their lives.  That one was the true test of fan loyalty.

Casey Stengel said, “I’d like to have all three.”  Now that would have been a platoon!

Eventually Duke dropped back in the argument and we were left with Mantle vs. Mays.   And finally, in 1995, it was Mantle who settled it by telling the audience at the annual New York Baseball Writers Association dinner, “Willie was the best of us.”  (Koppett was there, in the ballroom of the Sheraton Centre Hotel, but he did not rise to disagree.  Disappointing.)

Those Yankee-Dodger years of the ‘50s were wonderful years for debating not only the centerfielders, but also the catchers (Yogi Berra vs. Roy Campanella, three MVPs for each), and the shortstops (Phil Rizzuto vs. Pee Wee Reese).

And then in 2001 I was working with Whitey Ford on a book (written with Phil Pepe) in which he chose the best Yankees of all time, and without hesitation, named Derek Jeter over his long time teammate Rizzuto.  I was a little shocked; after all, he and Rizzuto had been friends for more than a half-century.  Jeter had only completed five seasons by then.

Speaking of Jeter, I had long ago been taught to observe baseball as though it was unfolding history.  One didn’t need to wait years to make judgments or celebrate milestones.  That was why there came a point when I would tap a friend on the shoulder and point to Jeter at short, Alex Rodriguez and third and Robinson Cano at second, and say “Look at that….you might be seeing the best third baseman, shortstop and second baseman in Yankee history all together at once, even with all the  great players who have come before them.”

Mark Teixeira at first base was pretty good too, but now we’re talking Gehrig of course.  Or Chase, if you were over 100 years old.

I was especially pleased to see Monte Irvin selected for left field.  Monte doesn’t get enough recognition today.  I was proud of our being genuine friends – not someone who I enjoyed going to lunch with because he was a Hall of Famer, but just because he was such good company.  He was in that sense, a regular guy with no airs, no sense of entitlement, no one looking for special courtesies.

And the truth was, he could well have been “the first,” he could have been Jackie Robinson, and oh boy, to hear others tell it, what a ballplayer he was.  Maybe the best athlete to ever come out of New Jersey.  (I hope that sounds like the compliment I intended it to be).  He did not get to the Major Leagues until he was 30, and although he had fine seasons – third in MVP voting in 1951 – most fans suspected that he must have really been something to see when he was in his 20s.  Of that, Major League baseball fans were robbed.

So one day I just happed to ask this extremely modest man, “Who would you compare yourself to when you were at your prime, say in the early ‘40s, before the war.  Were you like Willie Stargell?  George Foster?  Fred Lynn?”

He answered without hesitation.

“Oh, DiMaggio,” he said…..as he sprinkled salt on his fries.

You could tell he meant it and that he’d always felt it, and as long as someone asked, he could give them an honest answer.  DiMaggio.

I never looked at Monte the same after that.  He was still this wonderful friend and great companion, but…..he was as good as DiMaggio.  I had no reason to doubt it, none at all.  And when people talk about the color line before Jackie Robinson, I think of that and of how we baseball fans, those who have no color distinctions in watching the game, were deprived of having another DiMaggio in the game.

I’m glad he gets his just due here.

Another one I’m glad gets a shout out is Christy Mathewson.

Had Mark written this book in 1910, Matty would have made the list, and had he and his heirs then updated it every ten years – Matty would have been in every edition.  To last this long in the circuit of public opinion is a remarkable thing, because the natural aging process of the sport tends to vacuum up achievements.

For instance, if you led the league in something in year one – 1876 – you also held the all-time record.  In year two, 1877, some of those records fell.  By 1900, a whole bunch of them had fallen.  By 2019, imagine how hard it would be to break a record that stood for over nearly a century and a half.  That’s why most statistical achievements today generally begin with “the best since…..”

New York has had some amazing ballplayers, but what a treat it must have been to go to the old Polo Grounds and watch Matty with his fadeaway.  Mathewson was a control pitcher whose records today are hard to fathom.  How do they even translate to the modern game?  Imagine if you had Mathewson on your staff and you pitched him every fifth day and regularly pulled him after 100 pitches to let the bullpen finish up.  Unthinkable.

And I see Mark likes Mike Piazza behind the plate.  I was all set to argue that it’s neither Berra nor Campanella because Bill Dickey was better, but you’ve gone and picked Piazza.  Oh this is going to get people talking.

Which is, as we said, the very point.