Just how many Cy Young Awards would Cy Young have won?

He didn’t win any of course, because the award only began in 1956, eight months after he had died.  Commissioner Ford Frick, sensitive to the repeated failure of Philadelphia’s Robin Roberts to win an MVP Award, proposed the award to distinguish pitchers from everyday players, without removing pitchers from MVP competition.

But the idea that retroactive Cy Young Award winners and Rookie of the Year winners (an award begun in 1947), could be determined back to 1900, had always intrigued me.

I was working in the office of Commissioner Bowie Kuhn in 1980 when I had a discussion of this with Bob Davids, the founder of SABR (Society for American Baseball Research).

SABR was by then a nine-year old organization of about a thousand baseball history-loving members.  It had established a reputation for solid research skills; its credibility was strong and this seemed like a good group to take on such a project.  It was an unofficial conversation; it would be strictly a SABR project, not sanctioned by MLB or by the Baseball Writer’s Association of America, whose members voted on the actual annual awards.  Still, it seemed like a fun project for the membership.

Davids turned it over to researcher Lyle Spatz, who proceeded to diligently comb through the Baseball Encyclopedia in search of likely annual candidates.  The preparation of the ballots would actually take over a year.  These were the days of postal service communication, and the very mailing of ballots and receipt and tabulation was time consuming.  It was done a decade at a time, beginning with Rookies of the Year.

Spatz’s ballot included the preferred stats at the time – (no WAR, or WHIP, etc.), and voters were asked to list up to three candidates in order.  A 5-3-1 point system was awarded, as was done for the “real awards”, and voters were reminded that future performances, reputations, post-season, etc., should not be taken into account.  It was as though they were voting fresh each year at the end of the regular season.

“We received a few hundred ballots when we began and it gradually increased,” says Spatz.  “By the time we got to the Cy Young Award, we were in the 500-700 range.”

The retroactive Rookies of the Year were announced in 1986, (now called the Jackie Robinson Award, and the retroactive Cy Young winners in 1988.  (Researcher Bill Deane later did his own compilation in Total Baseball with some different winners, using the SABR honors as part of his research tools).

The fact that so many ballots were cast by such a knowledgable group, gave immediate credibility to the voting.  And while the list of winners has never made its way into a widely recognized honor, for some of the winners, had they known, it might have been a lifetime highlight!

Imagine, for instance, if outfielder Homer Smoot of the St. Louis Cardinals, who died in 1928, had known that he might have been National League Rookie of the Year in 1902.  Think he might have bragged about that a little?  (He played five years in total).

Or how about old Joe Berry, retroactive American League Rookie of the Year in 1944 while playing for the Philadelphia Athletics?  Joe went 10-8 that year with 12 saves and a 1.94 ERA.  He was 39 years old, and would have been the oldest Rookie of the Year ever.  He died in 1958 and never knew of this honor.

Then there was Billy Sullivan, a catcher for the Boston Braves who was voted the first Rookie of the Year award in this process.   It turned out, he was the only catcher to win the award in either league until Johnny Bench won the actual BBWAA award in 1967.  For 66 years, he could have claimed to be the only catcher to ever win.  (Rudy York, the 1937 A.L. winner, caught 54 games – enough to lead the league in passed balls – but he also played third base).

Some of the retro-winners did indeed go on to the Hall of Fame, including Addie Joss, Chief Bender, Al Simmons, Earle Combs, Tony Lazzeri, Joe DiMaggio, Ted Williams and Phil Rizzuto in the American League; Christy Mathewson, Grover Cleveland Alexander, Rogers Hornsby, Kiki Cuyler, Paul Waner, Lloyd Waner, Dizzy Dean, and Johnny Mize in the National League.  It would have been an additional line on their plaques!

Oh, and one more: Babe Ruth.  Yes, Ruth would have won the Rookie of the Year award in 1915 as a pitcher with the Boston Red Sox – and then, according to the balloting, would have won the retroactive Cy Young Award in 1916!  Two more Ruth “honors” we did not even know about.

Eleven St. Louis Cardinals were voted Rookies of the Year, the most of any team, with the Yankees and the Cubs having ten each.  And Stan Musial was not one of the eleven Cards, beaten out in 1942 by his teammate, pitcher Johnny Beazley, who was 21-6, with a 2.13 ERA, compared to Musial’s .315 with 10 homers and 72 RBIs.

The Cy Young ballots filled in the years in which there was just a single winner (1956-66) by adding the “other” league.

Three rookies also won the Cy Young balloting -Alexander of the Phillies, in 1911, Jim Turner of the Boston Braves in 1937, and Gene Bearden of Cleveland in 1948.  There wouldn’t be another one until Fernando Valenzuela won the BBWAA honor in 1981.

Turner, later a New York Yankees pitching coach, was a 33-year old rookie when he took the two hypothetical “honors,” going 20-11 for Boston, leading the league in ERA and complete games.  He never approached 20 victories again in a nine-year career.

The answer to the question posed at the beginning of this article is three – Cy Young was voted the winner of the first three American League Cy Young Awards.  But he wasn’t the only legendary name who put up a bunch of them in SABR voting.  These were, after all, the days of eight-team leagues, and perhaps 32 starting pitchers in the competition.  Mathewson won seven between 1903-1913, which would equal the modern record of seven held by Roger Clemens.  Alexander won five between 1911-1920.   Walter Johnson won five between 1911-1918, and was interrupted in 1912 (when he was 32-12), edged out by Smoky Joe Wood.  Lefty Grove won six straight between 1928-1933.  Warren Spahn won five between 1949-1961, including one BBWAA award.

Cleveland’s Bob Feller won three straight, 1939-41, before leaving for military service in World War II.  In his absence, the Indians’ Hal Newhouser won in 1944-45-46, with Feller winning again in ’47.  With all the statistical accomplishments that Feller failed to reach by missing those war years (such as 300 wins), he certainly figured to have been a strong candidate to add to those four “Cy’s” during his absence.

There are some names among the winners who might have fared better in the collective memory of fans had they been able to boast of a Cy Young in their resume.  Among them would be Dolf Luque, Ray Kremer, Larry Benton, Pat Malone, Bill Walker, Bill Lee, Hank Wyse, Al Orth, George Mullin, Jim Bagby, George Uhle, Tommy Bridges and Tex Hughson.

It is somehow fitting that another one was Bill James of the 1914 “Miracle” Boston Braves, who is no relation to the stat pioneer and SABRmetrics guru Bill James.  But it feels like a nice tip-of-the-cap to SABR just the same.  James (the player) was a true one-year wonder, going 26-7 for that championship team, but only 11-14 in 38 other appearances before and after that season, covering four years in all.

As one would expect, pure relief pitchers seldom won a Cy Young Award.  It was a different span of baseball, and the profession was not thought of as highly as it is today.  But Jim Konstanty of the Phillies finally broke through in 1950.

No St. Louis Brown ever won a Cy Young Award, but the franchise did have two top Rookie winners – George Stone in 1905, and Wald Judnich in 1940.

There was no hardware to accompany any of these; no listing in the record books, no historic markers in their home towns.  But the exercise was a worthy one, and so – belated congratulations go to the winners of these coveted awards…..that never were. 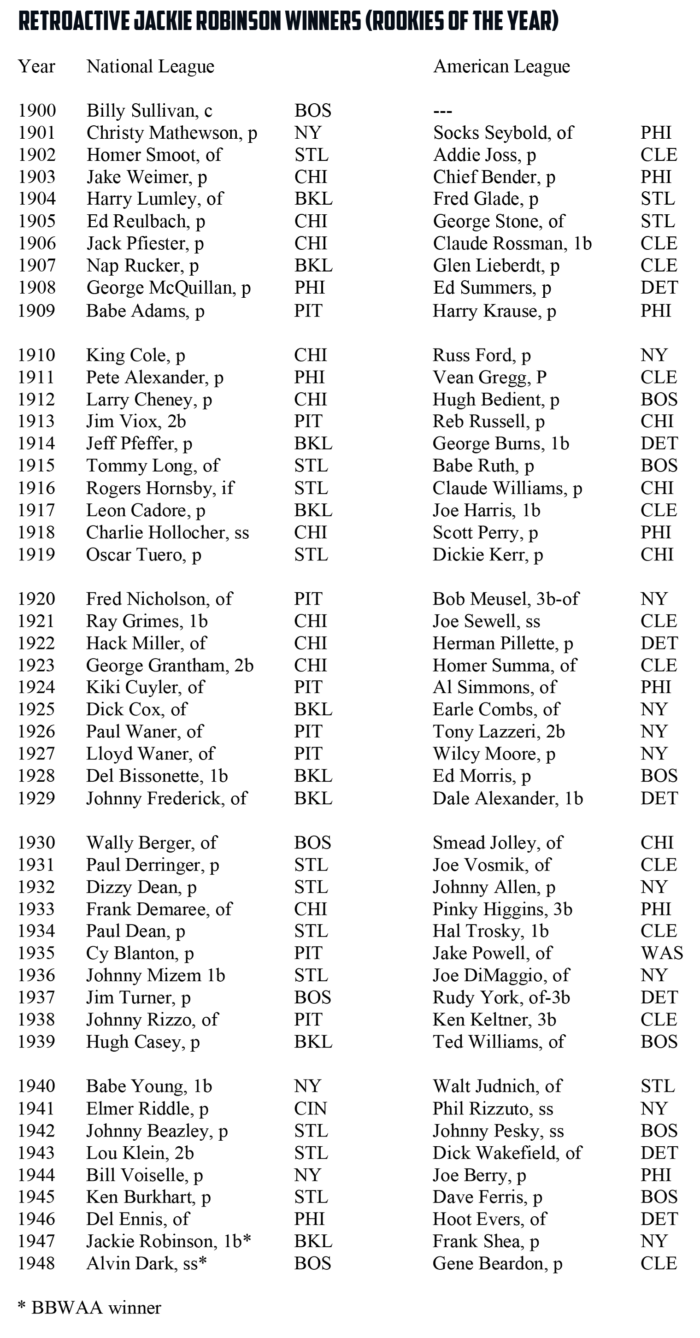