The 1970 New York Yankees were in the midst of their long drought between pennants (1964 to 1976 was the actual span), and despite the emerging stardom of Thurman Munson and Bobby Murcer, the team was challenged at the box office, especially since the retirement of Mickey Mantle, which he announced in spring training of 1969.

It was my third season as part of the team’s public relations team, and in the wake of the rival New York Mets’ 1969 world championship win, the challenge was substantial.

Mantle loomed large over the franchise. He was just 38, and under the right circumstances, might well have still been playing. But sadly, he was 32 when he had his last Mantle-like season, and 36 when he quit. His indifference to conditioning had indeed taken a toll—something barely emerging in fans’ consciousness with the publication of Jim Bouton’s best-selling book, Ball Four.

The book, which detailed Mantle’s tendencies to overindulge in nightlife, seemed to do little to shock Mantle’s loyal fan base. Fans just readjusted what they knew about him and, if anything, it made him even more popular.

It was after all, a swinging time for New York athletes—Joe Namath and Walt “Clyde” Frazier were current heroes, and it somehow felt permissible to include Mickey in the club.

Mick’s uniform retirement ceremony was the highlight of the team’s 1969 schedule, as 60,096 people filled Yankee Stadium to see the Mantle plaque added to the outfield wall, and then cheered him so mightily on Old Timers Day a few weeks later, that the Joe DiMaggio introduction that followed was drowned out.

(We, the PR team, decided later that week to reverse the introduction in the future so DiMaggio could get a full and robust round of cheers all for himself. Bad idea. Joe was not happy and threatened to never return. So we restored him to last, and he returned every year but one for the rest of his life. Mick could hardly care when he was introduced).

So now, 1970 came in the wake of the Mantle commotion of 1969. The Yankees were playing better than expected, en route to 93 wins, but never in contention, as Baltimore was running away with the race. Mick was employed as a guest instructor in the Yankees spring training camp, and then as an NBC Game of the Week commentator.

But Yankees team officials were watching the Mets draw nearly 2.7 million as their own attendance struggled to reach 1.1 million. Desperate times seemed to call for desperate measures.

And so, Lee MacPhail, the Yankees general manager, reached for his batphone and called the batcave where the onetime “Commerce Comet,” Mantle himself, resided.

“Would Mickey like to join us as first-base coach?” said MacPhail. (The Mets had Yogi Berra coaching first.)

Mantle wasn’t happy as an NBC announcer; he didn’t feel that was his calling. Without much hesitation a deal was made, under which Mick would rejoin the Yankees on August 30 for the balance of the season, and then “see about” the future. He was probably paid about five thousand dollars.

Although the story of his leaving NBC and rejoining the Yankees was widely publicized, Mickey never actually informed NBC. The NBC Sports executives chose to shrug their shoulders and let it pass, but, of course, it was not very courteous not to inform one’s employer.

Clubhouse Manager Pete Sheehy hurriedly took Munson’s flannel jersey, well worn from five months of chest-protector use, removed the No. 15 and had a No. 7 sewn on. (His spring training uniform had wandered off at some distant Old Timers Day gathering and never made it home). Munson got a new No. 15.

Mick’s manager was his old manager, Ralph Houk; his fellow coaches were Jim Hegan, Dick Howser, Elston Howard, and Jim Turner. He knew some of the players from the spring, but really, who were these guys? Where were Moose and Whitey and Hank? Who were Danny Cater, Curt Blefary, and Gary Waslewski?

On the appointed day, August 30, Mantle took his old locker near the trainer’s room and began to dress. There on his stool was a memo from PR, outlining his duties for the day—a press conference, a sponsor meet-and-greet, an autograph session, photos on the field with contest winners, a clinic, and a series of phone interviews. “What the . . . #@%$!” he started to say, before realizing it was a gag.

“Pete, how about bringing me my breakfast of champions?” he said to Sheehy.

Pete wandered down the hall to the press dining room to bring Mick a beverage in a Dixie cup. Ah, yes. The Mick was back.

If seeing Ron Klimkowski, Pete Ward, and Ron Hansen was awkward (where were Billy and Clete and Roger?), nothing was more awkward than the first-base coaching assignment laid before him.

The popular Elston Howard was the team’s first-base coach. Mickey really liked Ellie—he had even suggested that he’d like to room with him while they were players, although black/white roommates just weren’t happening in Major League Baseball yet.

But the plan was, Ellie would coach the first three innings, Mick the middle three, Ellie the last three. Awkward. 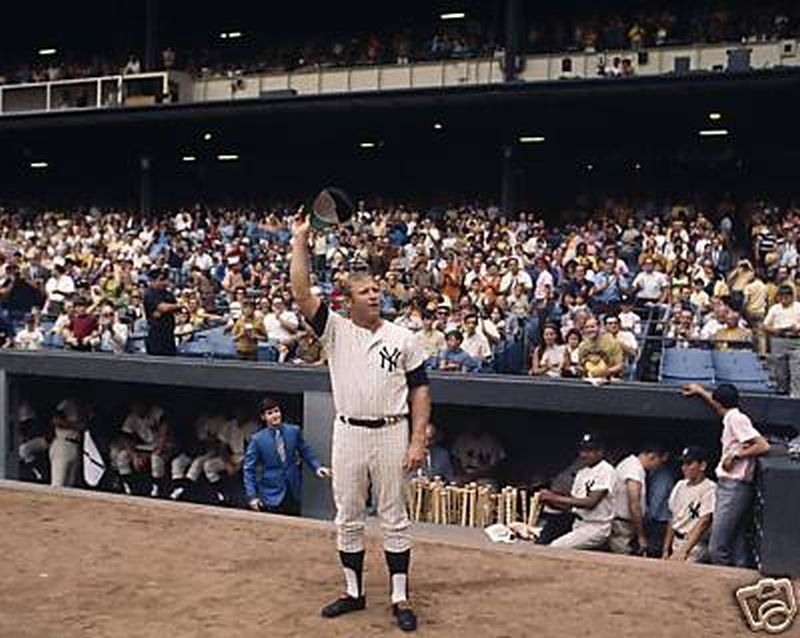 Mick was introduced by PA announcer Bob Sheppard before the game, and in the fourth inning, he took his place in the coaching box as 20,980 roared. He doffed his cap again and acknowledged them, feeling a little silly over it all. But he did a good job, because the very next inning, the Yankees’ Roy White hit a grand slam home run to put New York ahead of the Twins 5–2, bringing the fans to their feet once again. And that turned out to be the final score. What a coaching debut!

There were only 18 more home games left on the schedule when the fans could see Mick coach first. For a midweek, three-day series against Boston, September 15–17, they drew 22,085. Total. Not an average. Mick coaching first was not a real drawing card after all.

The Yankees did later schedule a clinic out in the left field bleachers (not a gag), where Mantle, standing atop the auxiliary scoreboard, was at his most charming—offering tips to youngsters, taking questions, and answering with knowledge and humor. When a teenage girl was called on for a question, she wanted to know if she could have his Yankee cap. She was wearing a cheap Cap Day Yankee cap, and he said, “I’ll trade you.” So she got his Yankee cap and he wore her $1.79 version with the stretch back for the rest of the clinic. It was great fun.

Although the Yankees had already shot their team photo in mid-August, it was decided to shoot it again. The players suggested it. They wanted to be in a team photo with Mickey Mantle.

The season ended and Mantle returned home to Dallas. Each of the Yankees full-season coaches received a second-place World Series check for $1,179.11, but Mickey, by choice, wasn’t included. He didn’t want to dilute the pool. He agreed to come to spring training in 1971, but as for coaching during the regular season, well, no. Displacing and embarrassing Ellie Howard was the last thing Mick wanted to do. There was a short conversation about not replacing Ellie and just staying in the dugout, but both sides realized that wasn’t what this was all about. It was about visibility.

That was Mickey Mantle’s last job as part of a team, his last team photo. For the next 25 years, he was a baseball wanderer. He made hundreds of autograph show appearances, appeared at Old Timers Games, became a greeter at an Atlantic City hotel, got suspended for that (essentially suspended from his spring training job) by Bowie Kuhn and reinstated by Peter Ueberroth, did some Yankee broadcasting on cable television, some beer commercials, and ran up frequent flyer miles. He remained beloved by the Baby Boomer generation.

Much was written about his life when he died in 1995, but lost to history was that month as a part-time first-base coach, the last regular-season team association he would have.