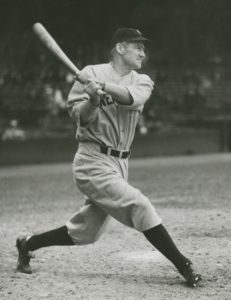 “If you had nine Combses on your team, you could go to bed every night and sleep like a baby.” ~ Yankee Manager Miller Huggins

What does a guy have to do in front of Yankees fans to get a little respect? Hit .325 lifetime?

During the 16 years that Bernie Williams patrolled center field for the New York Yankees (and before him Bobby Murcer, among others), there was frequent talk of that piece of real estate being “sacred” in the annals of Yankee Stadium history—hallowed ground, as it were, for its having been manned by Joe DiMaggio and Mickey Mantle, almost continuously from 1936 to 1966.

The point was embraced by Yankee fans. It added to the team’s cultural importance as well as to the reputations of Williams and Murcer, et al.

But mysteriously, it left off Joe DiMaggio’s predecessor, who was himself a Hall of Famer.

Earle Combs went back to the second year of Yankee Stadium, 1924, and had a stellar career there when the vastness of the real estate was much greater than it came to be under DiMaggio. Earle Combs, the first Yankee to wear No. 1 on his back and the first six-footer to bat leadoff on a regular basis in a Major League lineup, was a .325 lifetime hitter who played for no other team than the Yankees over a 12-year career, setting a team record with 231 hits on the legendary 1927 team and leading the league in triples three times. He played in four World Series with a .350 lifetime series average.

It was said that Lou Gehrig always played in the shadow of Babe Ruth.

Where does that put Combs, and for that matter, his Hall of Fame teammate Tony Lazzeri!?

The shadow was so long that it took Combs 35 years to get voted into the Hall of Fame (Lazzeri, 52 years), despite the widespread belief that players who played for the Yankees have an edge with Hall of Fame voters.
In that glorious year of 1927, when all eyes were on Babe Ruth’s record 60 home runs, Combs hit .356 with those 231 hits, tops in the league. He hit safely in 124 of the 152 games he appeared in, with 71 of them being multi-hit games. He was on base 295 times. He scored 137 runs (third in the league behind Ruth and Gehrig), led in triples with a club-record 23, and led in singles with 166.

No Major Leaguer has bettered those 23 triples in the 88 years since, and he has of course held the Yankees’ team record for that same span of time.

His team record for hits lasted 59 years—until Don Mattingly broke it in 1986. For many fans, Mattingly breaking the record was the first time they had heard Combs’s name. His 29-game hitting streak in 1931 was thought to have tied the Yankee team record (until Joe DiMaggio flew past it en route to 56 in 1941), although recent research came up with a 33-game streak by Hal Chase in 1907 (unacknowledged when DiMaggio passed Combs). Combs is still among the top 20 all-time Yankees in games, at bats, runs, hits, doubles, triples, on-base percentage, and batting average, where he trails only Ruth, Gehrig, and DiMaggio.

I had the pleasure of getting to know Earle when he came to Yankee Old Timers Days in the late ’60s and early ’70s, when I was part of the club’s public relations operation. What a gentleman he was to deal with! Despite his historic ties to the team during its first dynasty (after he retired, he stayed on as a coach under Joe McCarthy for ten years), he had no demands, expected no special treatment, and seemed genuinely flattered and honored to be invited. He was one of the few players who would send a note of appreciation for his invitation after returning home. Even when he finally got elected to the Hall of Fame, he said, “I didn’t think the Hall of Fame was for average players like me.”

Earle was born in Pebworth, Kentucky, about 80 miles southeast of Lexington, on May 14, 1899. Before turning to pro baseball, he was a schoolteacher. He played for McCarthy when Joe managed the Louisville Colonels, batted .380 in 1923, and was purchased by the Yankees after that season.
He missed most of the 1924 season with a fractured ankle, but came back in 1925, essentially his rookie season, to hit .342 and establish his place on this burgeoning team of superstars. Ruth, Gehrig, Lazzeri, Waite Hoyt, Herb Pennock, and later Bill Dickey, were all future Hall of Famers sharing the same locker room, as was Manager Miller Huggins.

Earle Combs did not have a reputation for a strong throwing arm, but it must be remembered that Yankee Stadium, when he first played there, was 490 feet to dead center. A center fielder had to respect that territory by playing deeper than he would in other ballparks, and thus a throw from deep center would seldom be a straight line to the cutoff man. While he compensated for the ludicrous distance, his reputation for a “weak arm” inevitably grew. Wasn’t his fault. 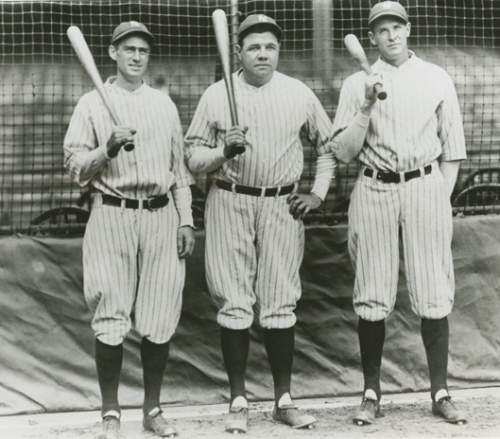 Combs was unceasingly popular with the New York writers, who found Ruth too hard to keep up with, Gehrig too shy to say much, and Bob Meusel just a grouch. Combs was mannerly, pleasant, and a good conversationalist. He read the Bible and didn’t smoke or swear. Such a person in a baseball clubhouse during the Roaring Twenties was hard to find.

While DiMaggio was getting seasoning in San Francisco in 1934, Combs crashed into a wall running down a fly ball on July 24 and fractured his skull, also injuring his shoulder and knee. There was fear for his life as he spent two months in the hospital. He came back in 1935 to play in 89 games before breaking his collarbone, and that marked the end of his active career. Combs was only 36, but DiMaggio was ready to replace him. Thus began a 10-year run as the Yankees’ first-base coach under McCarthy. So DiMaggio had the good fortune to have Combs as a coach as he adjusted to the Major Leagues.

Combs not only coached for McCarthy into the war years, but after a brief retirement coached for the St. Louis Browns (1947), the Boston Red Sox (1948–1952), and the Philadelphia Phillies (1954). The Boston assignment came at the urging of McCarthy, who emerged as manager of the Red Sox in ’48. So he got to coach not only Gehrig and DiMaggio, but also Ted Williams.

In retirement, Combs was chairman of the Board of Regents for his alma mater (Eastern Kentucky University) and state banking commissioner. A true “Kentucky colonel,” he also managed his 400-acre soybean farm in Kentucky, where he lived until his death in 1976. He is buried in Richmond.

After retiring as a player following the 1935 season, Earle Combs became a Yankee coach for nine years. He also coached the St. Louis Browns, Boston Red Sox and Philadelphia Phillies. 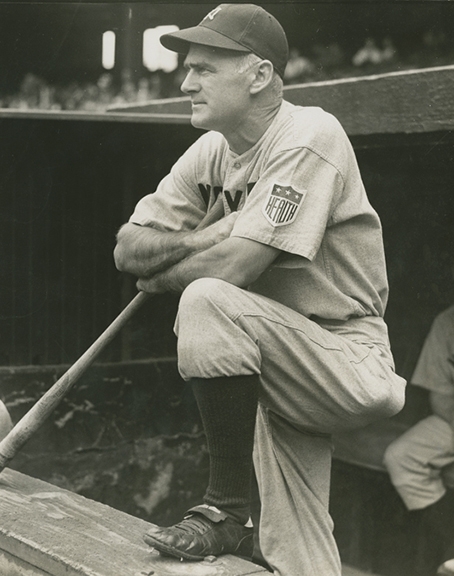 After retiring as a player following the 1935 season, Earle Combs became a Yankee coach for nine years. He also coached the St. Louis Browns, Boston Red Sox and Philadelphia Phillies.