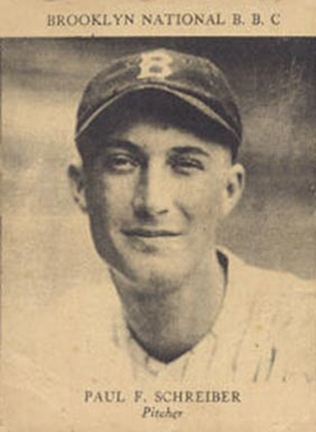 Paul Schreiber made his major league debut with the Brooklyn Robins on September 2, 1922. Source: VintageCardPrices.com

When one-time relief-ace Andrew Bailey took the mound for the New York Yankees this past summer, much was made of it being his first Major League appearance in two years. Well, Paul Schreiber went 22 years between appearances in a Major League box score.

And this is his story.

Schreiber, an affable 6-foot, 2-inch right-hander out of Duval High School in Jacksonville, Florida, signed his first pro contract in 1920, and after going 41–42 in three workhorse seasons in the minors, he was purchased by the Brooklyn Robins. He pitched one game in 1922 and nine more in 1923, relying on a fastball, a curve, and a knuckleball. He had no record but posted one save in a total of 16 innings of work. At 20, he was the youngest player on the team, which also included Zack Wheat, Burleigh Grimes, Moe Berg, and Dazzy Vance. Wilbert Robinson was his manager.

“I was getting along fine and one day I tossed a curve and suddenly there was a sharp pain in my shoulder and my arm was too sore to pitch,” he recalled for an interview sometime later.

He wasn’t the first, nor was he the last, pitcher to utter that sentence. Curveballs have a way of doing that.
So his Major League career was essentially done. From 1924 to 1931, he bounced around the minors without a curveball, twice managing to pitch over 200 innings. His work was largely in the New York–Penn League, and his career was pretty much over when he was 28, going 10–11 for Allentown in the Eastern League.
Hooked on the game and still young, he continued to pitch semipro baseball and wound up with the Bushwicks in 1937, a Brooklyn-based team of note.

Midway through the 1938 season, on the recommendation of scout Paul Krichell, Schreiber was summoned to Yankee Stadium to pitch batting practice for the New York Yankees. There, he displayed a rubber arm that was just fine in throwing down-the-middle fastballs for the Yankee sluggers to feast on daily. About half the teams employed batting practice pitchers in those days, while the rest relied on their coaches, relief pitchers, and utility infielders to do the job. Sometimes a starting pitcher would do the honors, pitching what today we call a bullpen session. 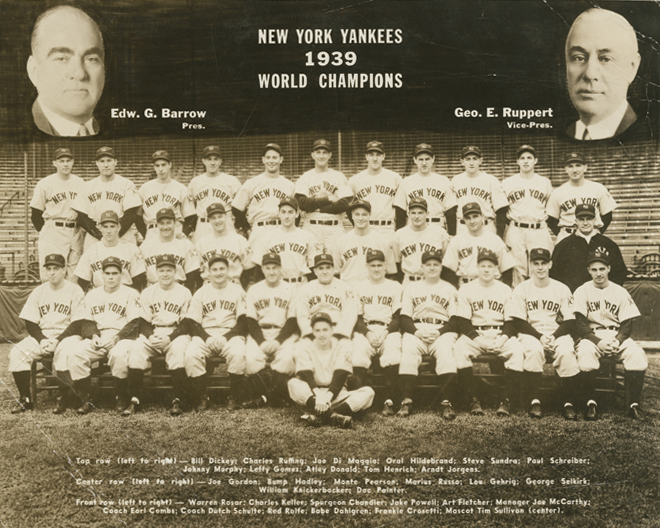 Schreiber joined the New York Yankees as a practice pitcher in 1938. He is pictured here fourth from left in the center row, next to an already ill and disabled Lou Gehrig.

The Yankee hitters—no less than Lou Gehrig, Joe DiMaggio, and Bill Dickey—liked hitting off Schreiber. Manager Joe McCarthy hired him for fulltime work, and although he had no number on his back, he wore the Yankee uniform and did his job quietly and professionally each day. He traveled with the team and appeared in team photos. During games, he would sit in the dugout and then head for the bullpen mid-game to warm up relief pitchers as needed. Occasionally during the season, he would appear in an exhibition game, perhaps against West Point or a farm club. On one occasion, he pitched “on loan” for the Dodgers against his Yankees in a preseason exhibition.

The Yankee players voted him a full share of their World Series money each year, which supplemented his small salary nicely. “I’d love to manage in the minors one day,” he said, “but this is great work. I’d much rather be doing this than pitching in the minors.”

“We thought of him as a coach,” recalled Tom Villante, a Yankee batboy in the ’40s. “He was very likable, smoked about 10 cigars a day, and he was very close to McCarthy. He used to drop me off in Queens when he’d drive home to his wife on Long Island.”

With rosters depleted during World War II, there came a day—September 4, 1945—when McCarthy turned to Schreiber for an in-game assignment. A real game. It was the sixth inning at Yankee Stadium against pennant-bound Detroit, and the Tigers already had a 10–0 lead. It had been 22 years since his name was in a Major League box score. He was 43.

The New York Times wrote, “The Yankee debut of Schreiber after nine years of service exclusively as batting practice pitcher, brought into focus a rubbery armed stalwart who celebrated his . . . first game in organized ball in fourteen years with an impressive exhibition.”

Employing his knuckleball (which he never threw in BP), Schreiber faced 12 batters, walked two, and struck out one. He allowed no runs and no hits. It was a masterful performance. He struck out in his one plate appearance. He was issued a number on his back—35—for this assignment. 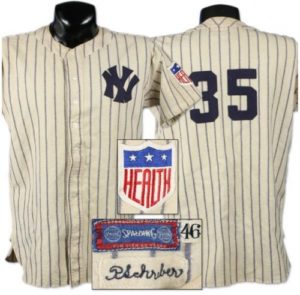 “He left the field with the cheers of the crowd (22,021) ringing in his ears,” the Timescontinued. “He deserved it.”

“How do you like my rookie pitcher,” said a grinning McCarthy. “Didn’t get a hit off him, did they? I tell you, I’ve been noticing that no one seemed able to hit knuckleball pitching this season, and Paul has a good knuckler. So why not try him out?”

His teammates were delighted. Four days later, he faced the Tigers again, pitching one inning, but this time allowing two runs on four hits. The Times, tongue in cheek, reported that he “finished up in a perfect demonstration of his forte, throwing the ball against the clubs of the batters.”

That was his final Major League appearance, 23 years after his first one.

McCarthy’s reign as Yankee manager ended the following year, but he wound up managing the Boston Red Sox, and he took Schreiber with him. Paul remained a Boston coach—and BP hurler—through 1958 and scouted for them until 1964.

“He taught Johnny Lindell to throw a knuckleball while he was with the Yankees,” said Villante. “And in 1954, Lindell went to the National League and used that knuckleball to come back as a pitcher. It was a Schreiber legacy.”

In retirement, Paul returned to his native Florida, and he died at 79 on January 28, 1982, in Sarasota. He took the mound for the Yankees 70 years ago, and he still holds the record for the longest span between appearances in a Major League box score. 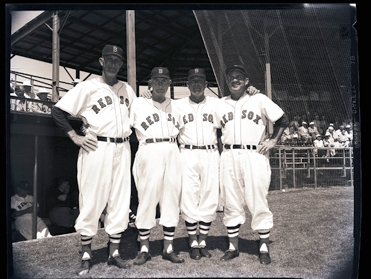