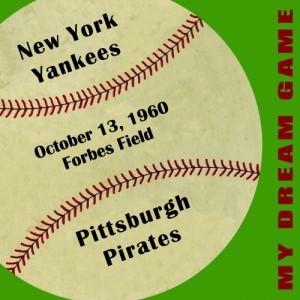 On October 13, 1960, the New York Yankees faced the Pittsburgh Pirates in Game 7 of the World Series at Forbes Field in Pittsburgh, a game that would be Casey Stengel’s last as Yankee manager.

I did watch it on NBC, and while I would have loved to have been there in person, I was fortunate to have been hired by Bob Fishel, the Yankees public relations director, seven years later. Over the years I came to know many of the players in that game. So in some ways, I not only feel as though I was “there,” but I continue to believe it was the most talked about game of the twentieth century. It certainly was by those who played in it. There was so much to it.

For instance, can you believe that with 77 batters in the game there was not a single strikeout?

I’ve told this to a number of the participants in the game, and to a man, they can’t believe it. There were five walks, but otherwise, everyone was putting the ball in play that sunny afternoon.

Then again, there was a lot that was “unbelievable” that day.

It was the only baseball season, to that point, that ended with a home run. The term “walkoff” wasn’t used then, but that’s what it was, and the homer eventually helped Bill Mazeroski get into the Hall of Fame. 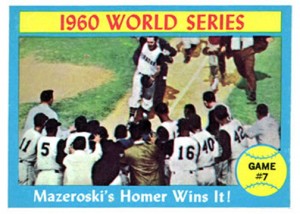 Minutes before, in the top of the ninth, Mickey Mantle made a play that has come to be lauded as one of the great heads-up plays in baseball history. But it wasn’t.

The Yanks were down 9–7 with Bob Friend pitching in relief. The Pirates were three outs from victory.

Bobby Richardson singled to center, his 11th hit of the Series. Dale Long, pinch-hitting, also singled, moving Richardson to second. Harvey Haddix came in to pitch to Roger Maris, who fouled out.

Up came Mantle, who promptly singled to right, scoring Richardson and moving Long to third. 9–8. Gil McDougald, playing what would be his last Major League game, came in to run for Long. (Why now? Why not when the aging Long was on first?) 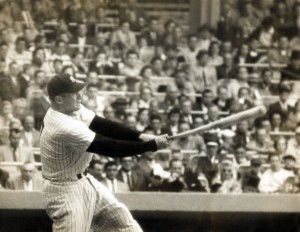 A hit by Mickey Mantle in the top of the ninth inning cut the Pirates’ lead to one.

Up came Yogi Berra, whose three-run homer in the sixth had given the Yankees a 5–4 lead. He hit a sharp one-hopper at Rocky Nelson, the first baseman. Nelson stepped on first—cancelling the force out at second, and Mantle, momentarily frozen, turned and dove back into first. He was safe.

If he was out—if Nelson had executed the unassisted double play—the World Series would have ended right there, the Pirates would have won 9–8, and Hal Smith’s eighth-inning home run would have been the big blow. But Mantle was safe and the game went on.

For decades the play was hailed as brilliant. But the odds were, Mantle should have been out at first on such a play. The smarter play would have been to get into a rundown between first and second, increasing the chances of extending the inning. But the dive into first was instinctive; Mantle couldn’t be sure whether Nelson caught the ball on a fly or on a bounce.

Nelson wore his glove on his right hand—farther away from the sliding Mantle than it would have been had he been right-handed. It was a panicked choice for Mantle and it worked out. Then again, why didn’t Nelson begin the play by throwing to second, for a more routine double play possibility? Or why, after recording the out at first, did he not throw home, seeing McDougald headed that way. He went for Mantle who was right in front of him. And it didn’t work out.

In the last of the ninth, Ralph Terry came in to pitch, and Mazeroski deposited the second pitch over the left-field wall for the Pirates’ first World Championship since 1925. It remains one of the great sports moments in the history of Pittsburgh. (Terry would be the triumphant pitcher in a Game 7 against San Francisco two years later.)

For the Yankees—who had won their three games 10–0, 12–0, and 16–3, and had scored nine in this one—it was a crushing defeat. And Stengel was fired, although Dan Topping (the Yankees co-owner) insisted it was a matter of age, and Casey would have been asked to retire even with a win.

The matter of World Series MVP continues to be discussed because Richardson, who had 12 RBIs, including six in one game (both still records after 54 years), remains the only losing player ever selected. 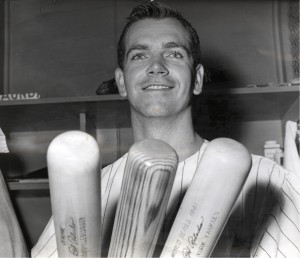 The only player in Major League history to win the World Series MVP from a losing team is Bobby Richardson of the 1960 New York Yankees.
Courtesy of the National Baseball Hall of Fame Library, Cooperstown, NY

Bob Fishel explained this to me. In those days, the vote for MVP was done by all the sportswriters in the press box. As was customary, they voted after the seventh inning ended, and then most headed downstairs to cover the winning clubhouse. After seven, the Yankees led 5–4. The election is now done without the writers, so this would not happen today. But that is how Richardson, and not Mazeroski or Roy Face, came to win the 1961 Corvette, awarded by Sport Magazine.

The eighth inning was memorable too; a real game-changer. The Yankees scored two in the top of the eighth for a 7–4 lead. In the last of the eighth, Bobby Shantz, who was spectacular that afternoon (four shutout innings in relief at this point, augmented by a base hit and a clutch fielding play), gave up a leadoff single to Gino Cimoli.

Bill Virdon, a former Yankee farmhand (and future manager), hit a perfect double play grounder to Tony Kubek at short. It should have been two outs, no one on—but the ball found a pebble, took a bad hop, and got Kubek in the throat. It was scary enough to send Kubek to the hospital overnight.

Forbes Field was 51 years old. Where in the world did a pebble come from after all those years of sweeping the infield? But there it was.

Two on, no one out, and Shantz gave up a single by Dick Groat through the hole between short and third, allowing Cimoli to score. 7–5. Stengel called in Jim Coates to pitch.

After Coates retired two batters, Roberto Clemente hit a bouncer to the right side and was safe at first, driving in a run. 7–6.

For many years, Yankee players grumbled that Coates was late in covering first. 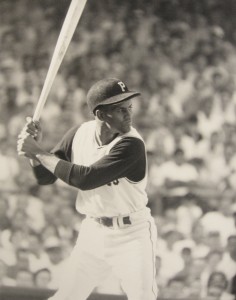 Roberto Clemente batted .310 with three RBI in the series and helped the underdog Pittsburgh Pirates to their first World Championship title.

But in 2010, a kinescope of the game was discovered in the archives of singer Bing Crosby, a part-owner of the Pirates. It was the first time players had seen this play in half a century, as the full play—including where the ball was hit—was not included in the World Series highlight film. The kinescope showed that the ball was hit closer to the second-base/pitcher’s mound side than many believed. Coates’s instinct to try to field the ball was correct. He was not guilty of being late covering first. The ball was just hit into a no-man’s land.

Up came catcher Hal Smith, a one-time Yankee farmhand who had just entered the game in the top of the inning. He belted a three-run homer deep to left, and the Pirates led 9–7. Hal Smith had hit one of the biggest home runs in World Series history.

Top of the ninth, and the Mantle dive back to first tied the score again. On we go to the Maz moment.

What a game. It was rife with controversy from the start, when Stengel’s pick to pitch—Bob Turley—didn’t have it and fell behind 4–0. By the second inning he was gone, and Yankees fans began to grumble that “if only Whitey Ford had started game one, he could have pitched game seven.” It would be the ongoing chorus in evaluating Casey’s 12-year run with the Yankees, which included 10 pennants. “If only . . .”

Lots of “if onlys” that afternoon. It’s why this was one game I would have loved to have seen in person. 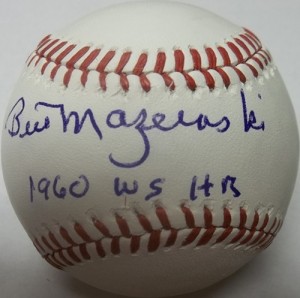