There is a fascinating exhibition this year at the National Museum of American Jewish History in Philadelphia. It is called “Chasing Dreams,” and although the venue would suggest a Jewish theme, it is in fact an exhibition of how the nation’s immigrant population—Irish, Italian, Latin American, Asian, Jewish, and others—used baseball as a means of assimilating into American culture.

There is, for instance, focus on what Joe DiMaggio meant to Italian-Americans, what Hank Greenberg meant to Jews, and what Roberto Clemente meant to Puerto Ricans, and how prideful those groups were in having a hero of their own to embrace.

Baseball provided the forum for them to fit into conversations, when baseball conversations were abundant on every street corner.

I was walking through the exhibition when it opened in April, and I spotted a letter on Washington Nationals stationery from 1953. My attention went to the three typed paragraphs, dictated to a secretary by Ossie Bluege, the team’s farm director, and sent to Mrs. Davis Sandlin, longtime assistant to Joe Engel who owned the Senators’ farm team, the Chattanooga Lookouts. 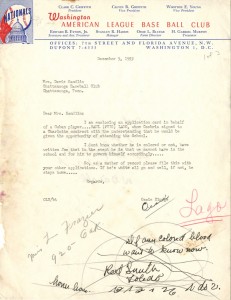 I am enclosing an application card in behalf of a Cuban player . . . RAUL (PUIG) LAGO, whom Cambria signed to a Charlotte contract with the understanding that he would be given the opportunity of attending the School.

I don’t know whether he is colored or not, have written Joe that in the event he is that we cannot have in the school and for him to govern himself accordingly. . . .

So, as a matter of record, please file this with your other applications. If he’s white all go and well, if not, he stays home. . . .

There are some handwritten notes on the letter, including, “If any colored blood want to know now.”

This is 1953, six years after Jackie Robinson integrated the game. The Negro Leagues were crumbling. Not every Major League team had signed a black player. Washington was among the holdouts. 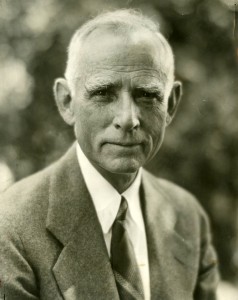 Clark Griffith owned the Washington Senators from 1919 until his death in 1955.

The color line was supposed to be the “unwritten law” of Organized Baseball. As Judge Kenesaw Mountain Landis said in 1942, “Negroes are not barred from organized baseball by the commissioner and never have been in the 21 years I have served. There is no rule in organized baseball prohibiting their participation and never has been to my knowledge. If Durocher, or if any other manager, or all of them, want to sign one, or 25 Negro players, it is all right with me. That is the business of the managers and the club owners. The business of the commissioner is to interpret the rules of baseball, and to enforce them.”

Nevertheless, Bluege had written this letter and mailed it. If there were other such letters along the way, from any teams, they have not emerged.

The unwritten rule was now written.

“This is the most blatant thing I know of since 1887,” said John Thorn, MLB’s historian and lead consultant for the “Chasing Dreams” exhibition. “Certainly this testifies to the continuing reluctance or implied per-club quota regarding African-Americans prior to the 1960s.”

Added Josh Perelman, chief curator of “Chasing Dreams” (and editor of a companion book of the same name), “I actually came across it in of all places, eBay. My focus has always been the research and study of baseball uniforms so I frequently search for ‘baseball correspondence’ . . . These have never been published or covered in any way, shape or form.”

The correspondence was made available to the museum by sports memorabilist Dave Grob.

On December 15, Joe Engel himself wrote to the Senators’ scout Joe Cambria (who was referenced in the letter) saying,

“Dear Joe: If Raul Lago has any colored blood at all, I do not want him to come to Winter Haven, for the Baseball School or for spring training. Sincerely, Joe.”

Typed in capital letters below his signature, it said, “NO COLORED BLOOD AT ALL, POSITIVELY WHITE, AS SNOW BALL.”

Handwritten below that, likely as a response written right on the Engel letter, it says, 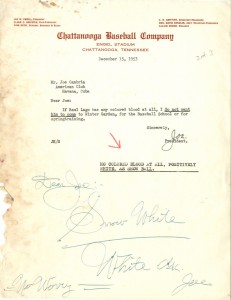 “Dear Mrs. Sandlin: I just heard from Cambria in regard to the above player and he informs me that the boy is ‘Snow White’ . . . So, all is in order for him to make his appearance . . . Ossie.” 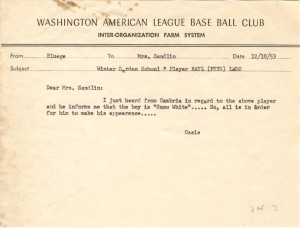 Well, as Captain Renault said to Rick in Casablanca, “I’m shocked, shocked to find that gambling is going on in here!”

So maybe we shouldn’t be shocked. But it is quite a discovery to see this blatant racism in baseball in the 1950s. In writing.

Bluege, of course, would have been carrying out company policy and not just acting on his own. Clark Griffith, the team’s 83-year-old owner, was really at the crossroads of history here. He had happily rented Griffith Stadium to the Homestead Grays for years while the Negro Leagues were in full bloom. Now there was no Negro League and he had no Negro players. He was, as writers liked to say, “a product of his times, a man from a different era.” He was, in fact, six years old when Lincoln freed the slaves.

His loyal employee, Bluege, a product of Chicago, had played third base for Washington from 1922 to 1939 (he’s still fifth all-time in games played for the Senators/Twins). Bluege had managed the team from 1943 to 1947 before becoming farm director. He had played for all three of the team’s pennant winners and had grown up in the baseball culture of his time. We don’t wish to be too harsh on the man—other than noting that he took that culture with him past the Jackie Robinson signing, into the 1950s, and was foolish enough to put it in writing. Perhaps others had as well, and if so, those memos have been lost to history. Certainly the concept of having a black-skinned player would not have played well in Florida in the early 1950s (as spring training hotel accommodations revealed), and Bluege was just stating the obvious on paper. “He stays home.” It may be more a statement on the realities of the South at the time than a reflection of Bluege’s personal feelings.

But oh, 61 years later, it jars ones sensibilities to see those three words possibly cancel a career in baseball. 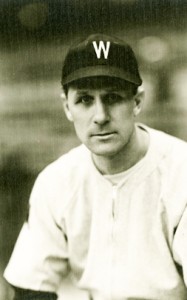 Ossie Bluege played for all three of Washington’s pennant winners.

Bluege stayed with the Senators/Minnesota Twins until 1971, rising to secretary/controller before retiring after 50 years in the organization. He died in 1985. 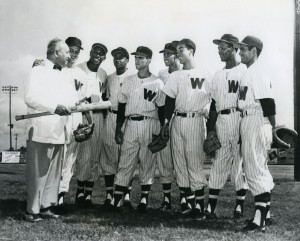 As for the player, the database at Baseball-reference.com reveals no perfect matches, the closest being one Vicente Raul Puig, born in 1933 in Mexico who played just seven games over three seasons in the Longhorn and Mexican leagues. But Bluege said he was Cuban, so this probably isn’t the guy.

Joe Cambria was one of the most respected scouts in baseball history and had a special relationship with Griffith for many years. As early as 1934, he set up a baseball school for prospects, which was likely what the Winter Haven project was replicating. The Yankees had been running such a school in Arizona to good notices. Along the way Cambria’s signings included George Case, Pete Runnels, Mickey Vernon, Early Wynn, and Eddie Yost, and out of Latin America Alex Carrasquel, Mike Fornieles, Preston Gomez, Camilo Pascual, Carlos Paula, Pedro Ramos, and Zoilo Versalles. 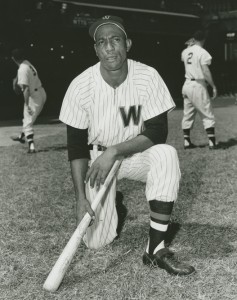 Carlos Paula would be the first black Washington Senator, making his Major League debut on September 6, 1954—10 months after the exchange of letters between Bluege and Mrs. Sandlin.

Bluege’s letter was never meant to go public, and he may have been simply being cautious about the living conditions Lago would be facing if he went to Winter Haven. It would be unfair to castigate him without knowing his intent—if he was keeping Lago out of a tough situation, or if he personally wanted no part of him.

Bluege’s words might have had more to do with player safety. As reported by Washington Post sportswriter Shirley Povich, an incident of bigotry took place in the spring of 1954 at the team’s minor league camp in Winter Garden, Florida. Bluege related that the local police chief had ordered the Negro players off the field and out of town by sundown. To keep the players safe, the team was moved to the Senators training camp in Orlando.

In any case, it is a fascinating exchange of documents, turning the unwritten rule into a written one after the game had been integrated.

The “Chasing Dreams” exhibition, with the Bluege correspondence, will be on display at the National Museum of American Jewish History through October 26 before leaving on a national tour. 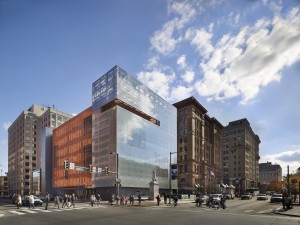