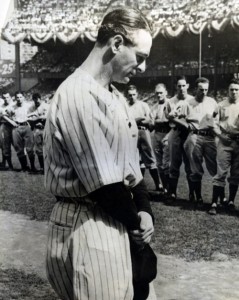 Seventy-five years ago, July 4, 1939, in what has come to be called the day of “Baseball’s Gettysburg Address,” Lou Gehrig delivered an unscripted yet brilliant farewell to baseball before an overflow holiday doubleheader crowd at Yankee Stadium.

It was at once a “memorable moment” for the National Pastime that did not involve a game, and a day that became one of the most emotional in the history of sports.

There are no players, ground-crew members, sportswriters, or baseball officials who stood on the field that day who are still with us. The last of them was Tommy Henrich, who died at 96 in 2009. But there are still fans, youngsters at the time, who crammed into the 16-year-old stadium for the event.

One was Ray Robinson, who went on to graduate from Columbia (Lou’s alma mater) in 1941 and to become a noted sports author, with an acclaimed biography of Gehrig among his works. Ray is now 93, still on top of his game, and still filled with memories, because Gehrig was his hero. He once tried to interview Gehrig outside the stadium for his school newspaper, but Lou was busy and instead left him tickets to come back the next day. It was a great thrill for Ray, standing so close to his hero.

“There are a few things that I especially remember,” he says. “I was sitting in the bleachers, and none of us that day thought that Lou was dying. We knew he had something that was forcing his retirement, but his impending death was not on anyone’s mind.

“I also remember that very pronounced New York accent. In those days, you didn’t hear the players’ voices very often. I hadn’t picked it up during our brief talk outside the stadium. But of course, he was born in New York and lived there his whole life.”

Lou Gehrig Appreciation Day had been hastily arranged. It was only on June 19 that the Mayo Clinic announced the findings of its examination of Lou, and reported it to be Amyotrophic Lateral Sclerosis—ALS—“a form of polio.” Certainly ALS was pretty unfamiliar to most people.

Two days later, the Yankees announced Lou’s retirement. Several sports columnists, the first being Bill Hirsch, but then Bill Corum and others in rapid succession, called for a “day” to honor him. It was decided that he would be honored on a July 4 doubleheader against Washington, and that the ceremony would be held between games.

If Ray Robinson was surprised by Gehrig’s voice, he, like millions of others, had probably skipped seeing the Western movie Rawhide, starring Gehrig in a cowboy role. It was filmed after the 1937 season and released in ’38. The ALS disease was probably already in him, but not visible as he handled many physical scenes perfectly fine. 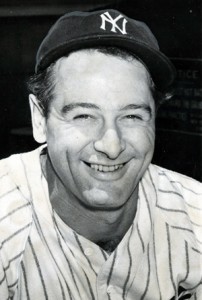 He played the 1938 season and hit a disappointing .295—his first time under .300 since he hit the same .295 in his rookie season of 1925, when his playing streak of 2,130 consecutive games began. No one thought there was anything wrong with him just because he had fallen under .300. He was 35, and it was the natural aging process. In retrospect, he likely had elements of the disease in him, yet he was still a productive player.

That was not the case by spring training of ’39, nor in the first eight games of the season when he had just four singles. That was when he took himself out of the lineup in Detroit, ending the remarkable streak. Ironically, Wally Pipp, whom he succeeded at first base 14 years before, was in the stands in Detroit that day as a spectator.

Ed Barrow, the Yankees general manager, took control of the field ceremonies on Gehrig Appreciation Day, working with Manager Joe McCarthy and columnist Sid Mercer, who served as master of ceremonies for the event. Jacob Ruppert had died in January, so Barrow was running the team.

After losing the first game 3–2, Lou was surrounded on the field by many of the 1927 Yankees as well as the current team, along with the Washington Senators and the ground crew, all in white. Mayor Fiorello LaGuardia, who loved ballpark ceremonies, was there. (He threw out the opening day pitch 11 times at Yankee Stadium.) Postmaster General James Farley was there. Lou received a number of gifts, but the one that touched him the most was a silver trophy from his teammates with an engraved poem written by John Kieran of the New York Times, which said:

We’ve been to the wars together,
We took our foes as they came;
And always you were the leader,
And ever you played the game.
Idol of cheering millions;
Records are yours by sheaves;
Iron of frame they hailed you,
Decked you with laurel leaves.
But higher than that we hold you,
We who have known you best;
Knowing the way you came through
Every human test.
Let this be a silent token
Of lasting friendship’s gleam
And all that we’ve left unspoken

—Your pals on the Yankee team.

A public address system had been put in place at Yankee Stadium in 1936, and the echo from the outfield speakers would serve as “co-star” that day, repeating everything everyone said with just the briefest delay. And while more than 61,000 poured into the park that holiday afternoon, millions more would see a portion of Gehrig’s speech over and over again in movie theaters during newsreels.

In 1989 I was executive producer of the Yankees telecasts on WPIX in New York, and together with our director John Moore, we visited the Fox Movietone News archives in Manhattan and managed to piece together most of the speech there, with just a little cut out and lost. No full version exists, but journalists on the scene recreated it at once. If there was a word or two wrong, it mattered little. The essence was captured in full, and it showed a man of humility and dignity, bidding a farewell to his fans. He probably talked it through with his wife, Eleanor, while driving down from his apartment in Larchmont, New York, but he didn’t write it anywhere.

Or maybe he didn’t plan anything at all. For when all the other speakers were done, Sid Mercer said, “Lou has asked me to thank all of you. He is too moved to speak.” But McCarthy saw that Lou did want to speak, and led him to the mike.

This is what he said:

Fans, for the past two weeks you have been reading about the bad break I got. Yet today I consider myself the luckiest man on the face of the earth. I have been in ballparks for 17 years and have never received anything but kindness and encouragement from you fans.

Look at these grand men. Which of you wouldn’t consider it the highlight of his career just to associate with them for even one day? Sure, I’m lucky. Who wouldn’t consider it an honor to have known Jacob Ruppert? Also, the builder of baseball’s greatest empire, Ed Barrow? To have spent six years with that wonderful little fellow,Miller Huggins? Then to have spent the next nine years with that outstanding leader, that smart student of psychology, the best manager in baseball today, Joe McCarthy? Sure, I’m lucky.

So I close in saying that I might have been given a bad break, but I’ve got an awful lot to live for.

He took a step back, and then returned to just say, “Thank you.”

“The luckiest man line was the one that all the newsreels used,” says Robinson, “but the one that really got us that day was when he said, ‘I might have been given a bad break.’ There was something deeply touching about that—the realization that it was over. Lou at first base was just such an automatic in our lives.”

Irv Welzer, seven years younger than Robinson and later a Tony Award–winning Broadway producer, was there too. “Two games for the price of one?” he recalled. “No way we would miss spending July 4 there, packed in the bleachers for six hours, sitting in all that cigarette and cigar smoke, a sandwich in tow, and a ceremony thrown in. That was where we needed to be! But when Lou spoke, everyone was quiet, everyone hung on every word. We knew we were saying goodbye to our captain. Even for a kid like me, it was very moving.”

The idea to retire his No. 4 may have been McCarthy’s, who later said no one would ever be captain of the Yankees again. (George Steinbrenner lifted that for Thurman Munson, another ill-fated Yankee captain.) This was the first baseball number to be retired (numbering of the players had only begun in 1929), and it had been previously done in hockey, when the Toronto Maple Leafs retired Ace Bailey’s No. 6 in 1934 after he had sustained a head injury and was forced to retire. Gehrig stood alone as a baseball player with a retired number until the New York Giants retired Carl Hubbell’s No. 11 in 1944.

The ceremonies concluded with Babe Ruth, arriving late and standing out in a white suit, wrapping his arm around his old teammate. They hadn’t been close for years, but this was the photo op of the day. Babe was, in a sense, stealing the scene, but that was okay. Having Ruth and Gehrig together meant a lot to everyone.

Unlike Pride of the Yankees, the film in which Gary Cooper played Gehrig, he didn’t walk off alone towards the dugout, but there was a band, and they did play “I Love You Truly,” and the fans chanted “We Love Lou!” as he exited.

He would stay with the team for the rest of the season, made the road trips, and dressed each day in his role as captain. But save for an exhibition game in Kansas City later that summer, he never played again. 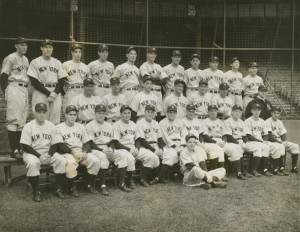 Yankees first baseman Lou Gehrig removed himself from the lineup on May 2, 1939 ending his consecutive game streak at 2,130. Despite announcing his retirement a few weeks later, Gehrig stayed with the team for the remainder of the season. Still team captain, Gehrig is shown here (middle row, fourth from left) in October of 1939, just prior to the start of the World Series.

He died June 2, 1941. All these years later, there is no cure for ALS (now known as Lou Gehrig’s Disease), nor is there any advanced knowledge of its cause.

Lou remains a great American sports hero, and Lou Gehrig Appreciation Day remains one of the most emotional moments in American sports. When the Yankees began holding annual Old Timers Days in 1947—they decided that the 1939 event was the first, and continued numbering from there. Today (today!), most people can do the “luckiest man” portion of the speech, echo and all, as though it is part of American history.