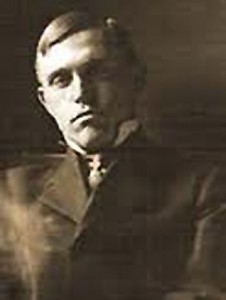 Sometimes when we write these essays, “Twilight Zone” moments happen. On the day I sat down to write about Damon Runyon, my wife was running in a 5K race at Yankee Stadium to raise money for the Damon Runyon Cancer Fund.

As I read an obituary on Runyon from 1946, I noted that the last sentence said he was living at the Hotel Buckingham on 57th Street and Sixth Avenue at the time of his death.

I raised my head from the computer keyboard and looked out my window. The Hotel Buckingham.

Or better yet, let’s return to the days of Damon Runyon when men were guys and women were dolls and baseball people gave him enough material to develop a style that would one day lead people to say, “That’s a Runyonesque character.”

Damon Runyon, a Manhattan kind of guy if ever there was one, was indeed born in Manhattan — Manhattan, Kansas — in 1881. He was Alfred Damon Runyon then, his mother’s maiden name being Damon, and he made it to the East Coast Manhattan when he was 30, joining the staff of the New York American after a dozen years gathering newspaper experience, first with the Army in the Philippines and then in Colorado, covering everything from politics to traveling hobos on passing freight trains.

Although his early adult years were marked by a fondness for alcohol, he later swore off and became a coffee drinker — as many as 40 cups a day, it was said. This certainly would have kept him well wired in pursuit of the night characters to which he seemed to gravitate — gamblers, gangsters, promoters, show people and athletes. Still, to hang with them and not imbibe with them must have been quite a challenge.

Although Runyon was on the reserved side with seldom a break for big laughter, he had a terrific gift for irony and comedy and loved to use names as a writing embellishment. Babe Ruth would seldom be just Babe to him; Mr. George Herman Babe Ruth seemed to better emphasize his points. If he needed to invent a nickname, that was all the better, like his “Uncle Wilbert” Robinson for the kindly manager in Brooklyn.

He loved — indeed he needed colorful characters for his prose. Lou Gehrig would prove to be of little interest to him. Little color there. Ty Cobb was perfect. He may not have been an admirable figure, but Runyon marveled at his skills and bent over backwards to point out his good points, such as helping young players (even opponents) with playing tips.

“It seems to be almost idle to speak of any of the other players of today in the same breath with Cobb, as Cobb was in the stretch of 10 year between 1908 and 1918,” he wrote in 1925, long after Ruth had entered the conversation. Still, how blessed was Runyon that a figure like Ruth would appear in his home town, giving him so much to work with during the Roaring Twenties!? (Another name he employed for Ruth was The Beezark of Kerblam). 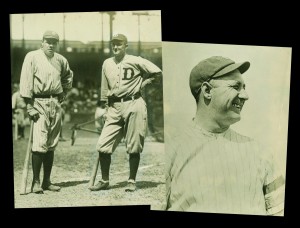 Legendary baseball columnist, Damon Runyon, had a knack for writing about colorful events and players such as Babe Ruth, Ty Cobb, and Ping Bodie.

Runyon’s writing was truly unlike any of his contemporaries, who might use “sphere” for ball but otherwise stuck to the script presented by the games twists and turns. Runyon might barely drop in the score while focusing on some grand character who emerged worthy of a full background check in addition to what he might have accomplished that day.

Ping Bodie was the first notable Italian Yankee, and an oversized personality was he — perfect for a Runyon as both friend and subject. And what a perfect name for Runyon’s copy, as were Bugs Raymond and Charles Victory Faust, two New York Giants hurlers, the latter more of a mascot than a pitcher, and a special favorite of Runyon’s.

Jacob Ruppert had a partner when he bought the Yankees, and Runyon fell in love with the name Tillinghast L’Hommidieu Huston. As though paid by the word, he could never write about him without giving readers the full name.

On road trips, Damon might entice readers with the latest in hotel luxury, the installation of bottle openers on the wall “so the clients will not annoy their fellow inmates of the hostelry by banging towel-wrapped bottle butts against the plastering. It is an excellent thought.”

Author Jim Reisler did all of us a favor a few years ago by compiling a collection of Runyon’s baseball writing into a volume called “Guys, Dolls and Curveballs“ (Carroll and Graf, 2005), which is recommended reading for a trip into baseball of a century ago, especially to marvel at the events personally witnessed by Runyon — from Cobb’s beating of a fan in the stands at old Hilltop Park to Casey Stengel’s inside-the-park World Series home run, to Walter Johnson’s 1924 Series heroics. Then there was his outrage and disgust when the Black Sox scandal unfolded in 1920. He berates the league presidents and writes, “They did nothing. They kept quiet.” 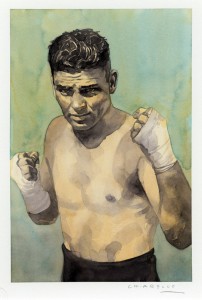 Famed sportswriter Damon Runyon spent years covering baseball and boxing for the Hearst newspapers. A frequent companion of Jack Dempsey, Runyon is credited with dubbing heavyweight champion James J. Braddock, the “Cinderella Man.” He was inducted into the International Boxing Hall of Fame in 2002.

A question that rises from time to time, is whether players ought to be considered role models and heroes. Runyon had an opinion on that in 1924.

“Sports writers frequently call outstanding players in football or baseball games HEROES. Of course they aren’t heroes. Nor are they anything approaching heroes.

“The surgeon who goes into the operating room for a delicate operation on which life depends has to have more gameness than any athlete will EVER be required to show by any situation in sport.

“Young gentlemen, gameness-courage is a wonderful asset. But don’t make the mistake of thinking it is confined to sport. You can see higher examples of real gameness all around you – but you won’t hear any cheering!

“Sports events never present occasions which demand fortitude, intrepidity and valor to the extent of the full meaning of the word hero.”

While Runyon remained a figure on the baseball scene, always welcome in press boxes, he would occasionally be dispatched on other worldly assignments, including war coverage in Mexico and attention to the situation in Europe that preceded the Great War. His regular column, aptly named “The Brighter Side,” was syndicated and separate from his game coverage. His national audience grew with magazine publications of his stories, and by the dawn of the 1930s, he was embarking on a career as a playwright.

“Guys and Dolls” would become his best-known work, and his characters (Nathan Detroit, for one) were predictable if one was familiar with his sports work. Others were Harry the Horse, Spanish John, Frankie Ferocious, Madame LaGimp, and Sorrowful, the Bookmaker. His novel “Little Miss Marker” became a Shirley Temple movie. “The Lemon Drop Kid” became a Bob Hope movie. It must have been great fun to be in his company in his regular banquette at Lindy’s on Broadway.

He was thought to be only 62 when he died of throat cancer — he was actually 65 — and he won the Spink Award from the Baseball Writers in 1967, putting his name in Cooperstown on the plaque honoring those winners. At his death, his friend Walter Winchell established the Damon Runyon Cancer Fund, which continues to this day.

And it would be highly possible that Damon Runyon would find Mr. Alexander Emmanuel ARod Rodriguez to be a particularly intriguing character for his typewriter. Runyon could give us all a smile from the seriousness of baseball matters today. 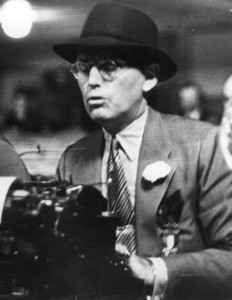