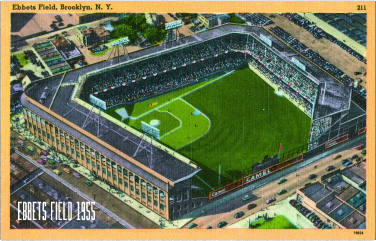 I think most people take their children to their first game at too young an age.

I know I did. I took my son to his first game when he wasn’t even three. He loved the ice cream, and when a Seattle Mariners player offered him a baseball, he turned it down. He was too busy with the ice cream. And I’m sure he has little recollection of the afternoon.

My own story is similar, but it has some interesting twists.

I turned seven in August 1955. Around that time, my dad chose to take me to my first game. 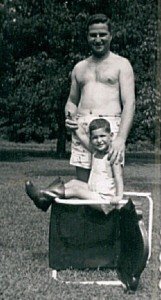 We went to Ebbets Field, which was a little less than a mile and a half from our apartment at 1215 St. John’s Place in Brooklyn. To get there, we may have walked six blocks along stately Eastern Parkway with its benches and cobblestones and then turned left onto Bedford Avenue for five more blocks. It would have been a long trek for my short legs. Maybe we drove in my dad’s 1950 Chevy. I just don’t remember.

That is the point. Being the fan that I would become, one would think every little detail of the story would be vivid. I wasn’t three; I was almost seven. I had two baseball cards—Satchel Paige and Billy Hunter of the 1954 Browns. Why I had them, I don’t know, but like every one of my possessions, I cared for them well. 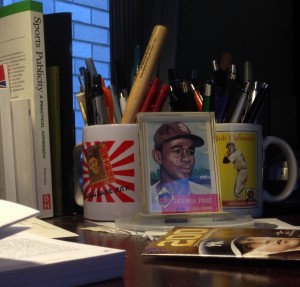 Here’s the thing that made this day—whenever it was—special. You see, my dad was born in Brooklyn in June 1916. This would make him 39 or 40, depending on the date. He grew up with 10 remarkably close friends. No one did friendship any better than these guys. They stayed friends through the Great Depression, into World War II, each other’s marriages and childbirths, and later, they all retired to within driving distance in south Florida. My dad, a D-Day veteran, and his friends, all gone now, were friends for more than 75 years.

But baseball was not one of their interests. Whatever it was they talked about on the street corners of Williamsburg—baseball wasn’t it.

My dad must have felt a parental need to take his young son to a ballgame—or maybe I asked. But you know what? It was his first game too. He had never been to Ebbets Field. It had opened in 1913, so it was still a sparkling new Brooklyn attraction when he was young. It just wasn’t on his list of things to do. Coney Island—yes. The Brooklyn Paramount—yes. Prospect Park—yes. But the Dodgers? Nope.

So what do I remember? Certainly not the date, and alas, not even the opponent. I do remember approaching from the rotunda side of the park, where it said “Ebbets Field” above the entrance—the section of the ballpark replicated by Citi Field today. It was lively outside—people selling “official” and “unofficial” scorecards, people selling “official” picture packs and buttons and yearbooks, people imploring drivers to park in their lots. Inside, I recall the smells of hot dogs and Schaefer Beer. “Beer here,” the hawkers shouted.

The fans were loud. They were mostly male, and they all seemed to smoke. A lot of them went to the game in their undershirts. Some had suspenders holding up baggy pants looped over the undershirts. A lot of them called the Dodgers, “dem bums!” Everyone talked to each other like they were old friends, even if they were strangers.

Our seats were behind the screen. They were surely general admission seats, not box or reserved, so we were a good ways back, and while those might have been considered good seats, I remember complaining about being behind the screen, and I regret that I had the nerve to do that after my dad’s fine gesture in taking me there. Who was I to complain about the seats? I’m sorry, Dad. You’d be surprised to know that I remember that. 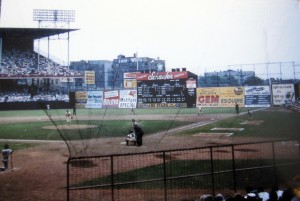 The game? No idea. Not a clue. Home runs? No memory. Duke Snider, Gil Hodges, Pee Wee Reese, Jackie Robinson, Carl Furillo? No impact. In fact, my only memory is of Roy Campanella, with the big 39 on his back, who was right there in front of us all afternoon, catching for Brooklyn. As a child, I guess I found him amusing to watch, being somewhat roly-poly and all.

So I have no final score to report on, and unlike so many people I’ve met over the years who can tell you the date, opposing pitchers, score, and highlights, I’ve got nothing. But a few months later, the story gets more interesting.

Fast-forward to October, and that same team that I saw was now in the World Series. I suppose I couldn’t help but be aware of a World Series going on in my home borough. 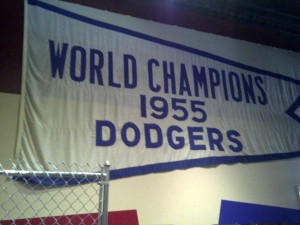 On October 4, 1955, Johnny Podres beat the New York Yankees 2–0 at Yankee Stadium, and the Brooklyn Dodgers won their one and only world championship. The Yankees had beaten them in 1941, 1947, 1949, 1952, and 1953, although I had no knowledge of this. What I remember about that day was looking out our second-story brownstone window at the odd sight of people dancing along St. John’s Place, whooping it up, shouting like . . . well, like the Dodgers had just won the World Series.

My heart ached for the Yankees. Something within me was pulling me towards the team I now saw as the underdog. They lost, so they were the underdog. Or so I reasoned.

And on that day, I became a Yankees fan. Forever. 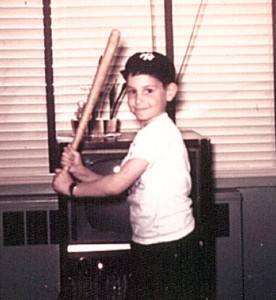 I never returned to Ebbets Field again. In 1956 I began collecting baseball cards, hanging up pictures of Mickey Mantle, going to Yankee Stadium, and reading box scores. I was hooked.

The Dodgers left for Los Angeles a year later, and mine was not among the broken hearts left behind.

But I’m proud to tell people that Ebbets Field was the scene of my first game.