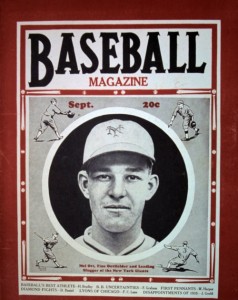 The tragic death of St. Louis Cardinals rookie Oscar Taveras during the World Series, victim of an auto accident in the Dominican Republic, brings to mind another ballplayer who died a similar death, albeit long after his distinguished career had ended.

Mel Ott has been dead for 56 years now, retired for 67, and only those approaching or into their ninth decade really remember him by sight as one of the most popular and successful players baseball has ever produced.

He was to the New York Giants what Lou Gehrig was to the New York Yankees—a role model, a hero to young fans, an example of clean living, and a tremendously productive ballplayer. When the Giants retired his No. 4 in 1948, he was only the third player so honored in baseball—after Gehrig, and his teammate Carl Hubbell.

Ott’s 511 home runs was a National League record, ridiculously far ahead of Chuck Klein’s 300, and trailing only Babe Ruth and Jimmie Foxx on the all-time list. He held the record until Willie Mays broke it in 1966.

A lot of Ott’s NL career records, which included homers, RBIs, runs, and walks, have been bettered, not to mention his record for shortest autograph (six letters), which was broken by Pittsburgh’s Ed Ott (no relation) in 1974. (Tennis star Li Na is going to be tough to beat overall.) But Ott holds a rather obscure record that is worth revisiting, because it does feel like one of those that may never fall, and nobody really knows about it.

Mel Ott led his team in home runs 18 years in a row.

Think about it: one franchise, one tough category, something never compromised by injury or the emergence of a one-year wonder or someone having a career year. There is nothing tricky here, nothing about franchises changing cities, nothing about missing war years, nothing about being tied in one of those seasons. 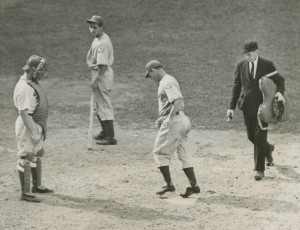 Mel Ott crosses home plate after hitting his 24th home run of the season in 1939.

So few players even spend that many seasons with one team. It is almost impossible to envision this feat being topped. But we would count the streak even if it meant changing teams, such as Barry Bonds with Pittsburgh and San Francisco. His best streak was 13 straight years leading his team. Babe Ruth’s best streak was eight, but it included a tie. Hank Aaron’s best streak was 11, which included a tie in the first of those years, so 10 without the tie year.

Not only did Ott spend his entire career with the Giants, but he never even played in the minor leagues, joining New York as a 17-year-old in 1926 and hitting his first Major League homer in 1927 at 18. He was the youngest player to homer in a Major League game at that point.

Although only 5 feet, 9 inches tall and possessing the odd style of raising his right leg before swinging, the left-handed “Master Melvin” was an immediate favorite of John McGraw, who deemed him to be the successor in right field to Ross Youngs. Youngs, another McGraw favorite, had died at age 30 of Bright’s Disease.

McGraw brought Ott along slowly, serving as a father figure to the gentlemanly phenom from Gretna, Louisiana. He kept him from socializing with his older, more rowdy teammates, and Ott remained a model of fine behavior throughout his life.

By the 1930s, he was well established as one of the great stars of the game. He played in the first 11 All Star Games and had his share of product endorsements. It would have helped his national standing had the Giants won more often. He was only in three World Series and had only one world championship—1933—in his career.

Because the Polo Grounds was only 257 feet down the right-field line, there has been a tendency to cast aspersions on his home run totals. He hit 323 of his 511 home runs at home, but even that disparity does not diminish the feat of leading his team for 18 straight seasons. He actually hit for a higher average on the road—.311 to .297, in compiling a career .304 mark. And while he had 10 seasons of 100 or more walks, he never struck out more than 69 times. 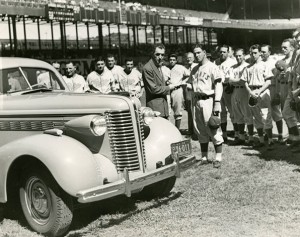 On August 18, 1938, National League President Ford Frick presented Mel Ott with a new sedan after Ott was voted the most popular third baseman in the All-American popularity poll.

Ott was named captain of the team in 1939, but in 1942 he became player-manager, succeeding Bill Terry. This was a big assignment—Terry and McGraw had covered the entire modern history of the franchise together.

Mel did not find great success in this dual role, although he remained an outstanding player. Except for a third place finish in 1942 and a 78–74 record in 1945, he was a sub-.500 manager with two last-place finishes in six years. It was of Ott that Leo Durocher of the Dodgers uttered his famous, “Nice guys finish last” quote.

On July 16, 1948, in his first year of retirement as a player, he was replaced by Durocher. It was an enormous story at the time, since Durocher was so identified with the rival Brooklyn Dodgers. 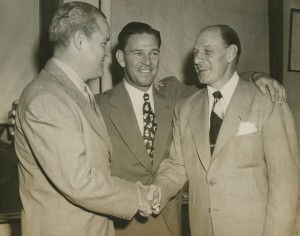 Mel Ott embraces team president Horace Stoneham and new skipper Leo Durocher on the day he announced his resignation as manager of the New York Giants.

Ott stayed with the Giants as an assistant to Hubbell in the farm department and then went out to manage the Oakland Oaks of the Pacific Coast League for two years (1951–52). It was the first time he had ever experienced minor league baseball, and in 1956, after a year doing Mutual Radio’s “Game of the Day” broadcasts, he was hired as a radio and television announcer for the Detroit Tigers. Aside from the 1941 All Star Game, this was the first time he’d ever been in Briggs Stadium. In fact, his visits to all American League parks were essentially “firsts.” So there he was broadcasting the feats of Al Kaline and Jim Bunning, working beside Van Patrick, and winning over new fans with a pleasing on-air personality.

It all came to an end on November 21, 1958, when Ott died at age 49 following a car crash while driving home to Metairie, Louisiana, in a heavy fog. The head-on collision occurred when the driver of the other car lost control.

It was a tragic end to a real poster boy for the game of baseball. His fans are mostly gone now, along with his records, but there it is on page 309 of the San Francisco Giants’ Media Guide: count ’em—18 consecutive listings of “Ott” leading the team in home runs.