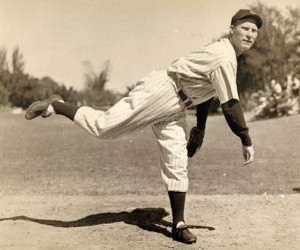 On Saturday afternoon, August 5, 1939, Red Ruffing went out and did what he usually did when he started a game for the New York Yankees. Pitching off the very flat mound of Yankee Stadium, Ruffing hurled a complete game 6–1 victory over Cleveland, allowing seven hits and a walk (the run was unearned). As a batter, he went 2 for 2 with a home run (Joe DiMaggio also homered). The game took one hour and 37 minutes and was played before 13,207 fans.

Just another day at the office for Red.

It gave him a 15–4 record for the season, one in which he would finish 21–7 for a team rated one of the best of all time. At 34, it was his fourth consecutive 20-win season. The home run was the 30th of his career (he would hit six more). He was one of the best-hitting pitchers in baseball history.

Generally unnoticed that day was the fact that the victory was his 169th as a Yankee, and it enabled him to pass Bob Shawkey as the franchise’s career leader. Little attention was paid to such things in the ’30s. There were no PR departments to hand out such notes. It would have taken an enterprising journalist to spot it, and it doesn’t appear that any did. (Not every newspaper is available for back research.)

Ruffing went on to win 231 games for the Yankees, and that remained the club record until Whitey Ford won his 232nd game with his final win in 1965. He would win only four more over the next two years and finished with 236. And there they sit atop the Yankees leader board—Ford 236, Ruffing 231.

Ruffing remains the winningest right-hander in Yankee history, and this August 5 marks 75 years in which he holds that distinction. Seventy-five years!

The all time honor could have been taken by Andy Pettitte, who won 219 in a Yankee uniform, but he spent three years with Houston and one and a half years voluntarily retired before calling it quits after the 2013 season. He almost certainly would have passed Ford had he not gone to the Astros, where he won 37 games between 2004 and 2006. But, the Ruffing mark looks very much like one that might last—dare we say?—a century.

Entering the 2014 season, the winningest right-hander on the Yankees active roster was Ivan Nova, with 38. There is always a chance Phil Hughes might one day return and add to his 56, or that Chien-Ming Wang somehow returns to add to his 55, but realistically, there is no active player who will make a run at it.

So with the 75th anniversary approaching, this seems like a fine time to revisit the career of Charley “Red” Ruffing.

An Ohio native, Ruffing began his Major League career with the Boston Red Sox in 1925 and was traded to the Yankees on May 6, 1930, for outfielder Cedric Durst and $50,000. On the day he left Boston, with a 39–96 career mark, it seems unlikely that anyone would have stopped him and said, “Charley, if they ever invent a Hall of Fame, you’re sure to be in it.”

Shawkey was his manager on the Yankees, serving his only year in that position. In 34 games (25 starts), Ruffing went 15–5. Durst, who had been a reserve on the great 1927 Yankees, hit .245 for the Red Sox and never played in the Majors after that season. It was not a good deal for Boston. Since they traded Babe Ruth to the Yankees, they had also traded them Waite Hoyt, Joe Bush, Sam Jones, and Herb Pennock. Now Ruffing. This wasn’t going well. 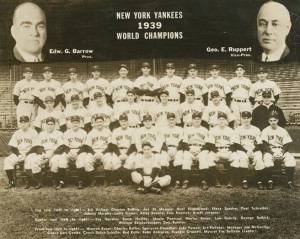 Some of Red Ruffing’s best seasons were with the Yankees from 1936 to 1939. He won 20 or more games each year to help New York capture four consecutive World Series championships. Considered one of the greatest Yankees of all time, the six-time All Star was elected to the Baseball Hall of Fame in 1967.

Lefty Gomez arrived that same season, and through 1942, Gomez and Ruffing formed as good a one-two, lefty-righty punch as there was in baseball—or in Yankees history. Together they won 420 games for the Yankees, mostly for Joe McCarthy, who succeeded Shawkey as manager in ’31. Together they were 13–2 in World Series competition (7–2 for Ruffing, 6–0 for Gomez), and they were part of six world championship clubs.

Ruffing’s accomplishments are even more laudatory considering what he was dealing with physically. As a 15-year-old, he lost four toes on his left foot during a mining accident. If it had been his right foot, his career would have been over. But his problems didn’t end with his foot. 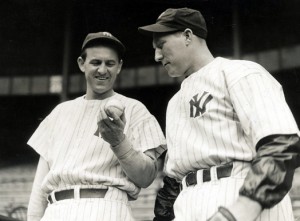 “I pitched most of my career with a sore shoulder,” he later revealed. “It hurt so much I’d keep going to doctors. But I wouldn’t tell the ballclub. They’d have traded my tail out of there. So I had to spend my own money. I’d pull into a town, pull down the telephone book and look under chiropractors for a likely looking name.”

The chiropractors were as important to Ruffing as Dr. Frank Jobe would be to later pitchers with Tommy John surgery. They helped him get through 4,343 innings over his 22 seasons, and no one knew of this.

He was a tough guy, ol’ Charley, as people in the game called him. “Red” was more the fan and newspaper nickname. (Except for Babe Ruth, who called everyone “kid.” How could he not remember Ruffing’s nickname, with his red hair? But he couldn’t. When Ruffing accompanied him to visit a children’s hospital one day, Ruth told the kids, “oh, and this here’s Meathead.”)

In 1943, at the age of 38, Ruffing entered military service and missed two seasons, returning at age 40 to still go 7–3 with a 2.89 ERA. The Yankees released him after the 1946 season, and he finished up with the White Sox in ’47, recording the last of his 273 cumulative victories. 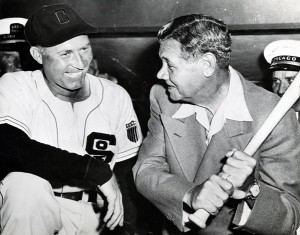 During his last season in the majors, with the Chicago White Sox in 1947, Red and former teammate Babe Ruth reminisced about the good ole’ days.

After coaching in the Cleveland organization (1948–58) and running a baseball school for the White Sox, Red finished his time in uniform as a pitching coach for the original, hapless New York Mets. It wasn’t something he put on top of his resume. Sometimes he would be with the parent team, and sometimes off watching their minor leaguers or opponents. His connection there was George Weiss, the club’s general manager, who had been the Yankees farm director and then general manager from 1932 to 1960.

The job lasted for 120 losses, or one full Mets season.