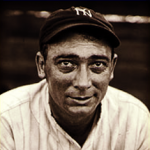 In 1927, the year Babe Ruth hit 60 home runs and Lou Gehrig hit 47 – the baseball world did not implode from power hitting. They were exceptions to the rule, almost as though they were the only ones being thrown lively balls by pitchers.

In fact, given that Tony hit 60 home runs in the Pacific Coast League in 1925, it might have been a disappointment to see that 18 next to his name. This, even though knowledgeable fans knew that the 60 had come in a rather extended schedule in which he had played in 197 games, scoring 201 and driving in 222. The PCL in those years seemed to go on as though there was no off-season between pennant races.

Lazzeri came from San Francisco and was the first great Yankee of Italian heritage, to be followed by Frank Crosetti (1932), Joe DiMaggio (1936), Phil Rizzuto (1941) and Yogi Berra (1946). He had a predecessor, a popular player named Ping Bodie, but Bodie wasn’t near the talent that these successors were.

Tony was a boilermaker by trade, and his strong forearms were a product of that profession. For a time he considered being a boxer. When he arrived in the big leagues in 1926, fans of that politically incorrect era took to shouting, “Poosh ‘em up, Tony!” when his line drives appeared too low to clear the fences. He carried the nickname “Poosh ‘Em Up” for most of his career. In his rookie season, he was already the second most popular player on the Yankees, with Italian-American organizations holding testimonial dinners for him all around the American League.

He suffered from epilepsy, a disease which kept other teams from signing him. As it turned out, no one ever saw him suffer an attack during a game, and there were only one or two sightings off the field during his baseball days. Once, his roommate Mark Koenig witnessed an attack at the team hotel, and ran down the hall to fetch Waite Hoyt, who “took care of him.” Hoyt’s only medical credential was off-season work as an undertaker.

As irony would have it, Lazzeri’s signature moment came in his rookie year, when he faced Grover Cleveland Alexander of the St. Louis Cardinals in the 1926 World Series. Alexander too, suffered from epilepsy. How odd that they would face each other then, at this key moment in the seventh game.

The bases were loaded in the seventh inning with the Cards ahead, 3-2. Rogers Hornsby, the playing manager for St. Louis, summoned Alexander from the bullpen to face the Yankees rookie. Alex was nursing a hangover after celebrating a complete game win in game six, the day before. He never expected to be called upon.

Ol’ Pete struck out young Lazzeri to end the inning. It was a classic World Series confrontation, like Dennis Eckersley-Kirk Gibson, like Reggie Jackson-Bob Welch. And the old man prevailed.