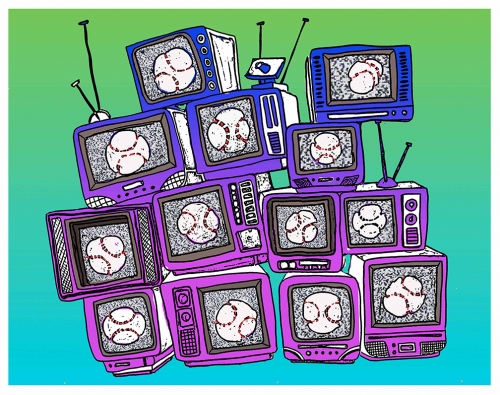 There was a time in baseball when the baseball writers could rightfully claim to be the only ones qualified to vote for the Hall of Fame, largely because they witnessed so many hundreds of games.

That was because you—those watching at home on TV (“Don’t touch that dial!”) —were seeing double images (ghosting), while walking around the room holding rabbit ears, searching for the best possible picture. It was “low-res TV,” and we were happy to take what they gave us. It was often a hopeless cause, made good only by not realizing better days were coming.

And that was all okay with baseball owners, who weren’t anxious to give away too much for free. Going back to the day radio first presented baseball, there was always a group of owners who felt “you’ll kill off live attendance.” (They were, of course, happy with the additional revenue paid in rights fees to the clubs.)
But then there were others who convinced them that it would, in fact, be a huge benefit—it would transmit the excitement fans have at the ballpark and convert that into ticket sales.

And for a large part, they were right. Radio, and then television, did not choke attendance, and in fact, played a part in increasing it. The broadcasts enabled announcers to plug upcoming games and promotions, and frequent shots of the fans in the stands having a great time were all calculated to showcase the environment when one attended in person.

And it made bigger stars of the players, so that going to the games meant seeing bigger stars in person. Who wouldn’t want that?!

In 1947 ailing baseball star Babe Ruth was presented with a television set so that he could watch the New York Yankees play from his armchair at home.

And then came cable TV, and for many, the picture was no longer carried into their homes over the air and “into” an antenna, but now we were a wired nation, and voila!—the pictures were markedly and instantly improved. At around the same time, the technology of producing games was also improving. The “long lens” close-ups of players went from a five-to-one zoom to a 70-to-one ratio. You didn’t have to guess whether Roger Clemens had shaved before a game—now you could see that he didn’t. Up to each whisker. You could practically do DNA testing with those close-ups.

We got instant replays, starting in 1959, and their value increased over time as production trucks came armed with extra tape machines to allow replays from several angles. It took a long time, but eventually Major League Baseball recognized that those replays held the key to getting the calls right. Slowly—painfully slowly—the use of the replays made their way into the game itself. (After all, it took almost 35 years for batters to wear helmets after Ray Chapman was killed by a pitch in 1920.) Television wasn’t just an add-on—it was part of the game.
After nearly three seasons of use, it was clear that almost 50 percent of argued calls were reversed. The days of infallible umpiring faded into myth. We can now say that it is likely that in almost 50 percent of all argued calls over the game’s history, the manager was right. God help us to think what this does to the very history of each season. We dare not go there. Bobby Cox, Earl Weaver, and Leo Durocher would have had a lot more complete games.

But the best was yet to come.

In his landmark book from 1965, The American Diamond, Branch Rickey wrote:
Baseball does not fit the television screen. Not yet! . . . The shape of the home television screen must be changed in the years to come. The “sports screen” doubtless will be produced by major television manufacturers on a 2 or 2½ to 1 ratio. When the width of the screen is 2½ times the height (in home projection) then you will see the baseball diamond in its full dimension and the interaction of its players and when the full wide screen is used to show a slide at second or to convey the distance an outfielder has to run to make a superb catch, the viewing will be truly exciting. The sports screen will likely take a few years, electronically, but it will come, and when it does, the televising of baseball will be the greatest beneficiary. The sports screen will also change the way baseball is reported and will give the announcers—especially those who are former players—much greater opportunity to explore the situation on the field.

Rickey, of course, saw things the average fan would never see, but he was right about television’s future. Flat-screen TVs with a different screen dimension became a must in the early 2000s. High-definition pictures, talked about endlessly as far back as the ’80s, followed suit, until, by 2009, it was mandated by Congress that pictures be delivered digitally. Sports coverage was well ahead of that mandate, offering hi-def in the early 2000s, and suddenly, sports never looked as good as it did in one’s living room.

As lenses now provided 95-to-one close-up ratios, today’s HD sets provide 720 or 1080 lines, with technology still in development to bring it to 4,000 (known as 4K) one day, although probably not for sports anytime soon. A picture in the “rabbit-ear” days showed 525 lines.

And we take for granted the enhanced graphic packages included in sports broadcasts, which include the PITCHf/x technology that traces the flight of the ball (including pitches into the superimposed strike zone box). The continuous presence of a mini scoreboard in the corner of the screen, originally created by Fox Sports and called the “FoxBox,” has been anything but a distraction.

The New York Yankees converted the field lighting system at Yankee Stadium to LED lighting for the 2016 season. They are not the first team to do so, but their announcement also included mention of the enhancement of the telecasts through truer colors during night games.

With microphones more strategically placed, with “lipstick cameras” being “inserted” around the ballpark, with handheld cameras becoming more convenient, the production continues to improve. One day our remotes might take us to sites like Baseball-Reference.com where we can do our own research on-screen while a game is being shown.

This is a golden age for sports on television, and it continues to get better.