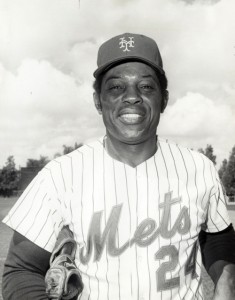 Willie Mays—the last New York Giants player—in 1973 which was his final season.
One of these years, one of these players will appear in his final Major League game and depart with a dubious distinction.

Be it Bartolo Colon, 41, (now with the New York Mets), Maicer Izturis, 34 (Toronto), Endy Chavez, 36, or Scott Downs, 38 (currently free agents), or Bruce Chen, 37, (released by Kansas City in September), – one of them will be the last active player to have played for the Montreal Expos.

It is an odd distinction that the players themselves are probably unaware of. But it is a milestone of note, the passing of an era, sort of like the last president to have fought in World War II (George H. W. Bush).

There is some tricky research involved with the tracing of the “last players,” because one cannot assume that the “last” played during the team’s final season. Colon and Chen, for example, wore the Montreal uniform in 2002, while the Expos’ final season was 2004. Only Chavez of the four made the shift to Washington and wore the Nationals uniform in 2005. (In a less likely scenario, Luis Ayala, who pitched in Mexico this year along with 2014 minor leaguers  Juan Rivera, Shawn Hill and indie-leaguer Brendan Harris could also return one day to “win the contest”).

This need to dig back is what leads to one of the game’s more difficult trivia questions: Who was the last active player to have played for the Brooklyn Dodgers? 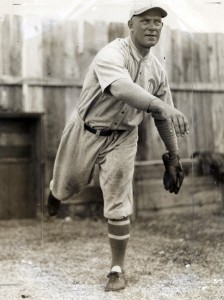 The team’s 1957 roster, their final year in Brooklyn, shows Don Drysdale, who retired in 1969. But digging back just one year—to their National League championship season of 1956—Brooklyn-born Bob Aspromonte shows up. Aspromonte pinch-hit in one game on September 19 and then waited four years for his next Major League appearance. He retired in 1971 after a 13-year career, mostly with Houston. Aspromonte is our answer.

The earliest franchise for whom this mattered was the New York Highlanders, who became the Yankees in 1913. The “last Highlander” was Jack Quinn, who was still tossing spitballs at age 50 for the 1933 Cincinnati Reds.

Cleveland dropped “Naps” and became “Indians” in 1915. The last active player who played for the Naps was pitcher Sad Sam Jones, who pitched his final game in 1935 for the Chicago White Sox at age 42. The last Brooklyn Robin, before they became the Dodgers for good in 1932, was catcher Al Lopez, who played until 1947. 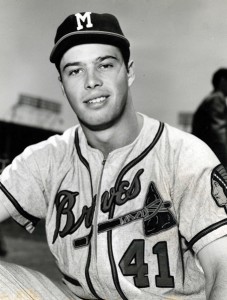 Eddie Mathews with the Braves in 1953—their first season in Milwaukee.

The first franchise involving relocation was the Boston Braves, who moved to Milwaukee in 1953. The last active player to have worn a Boston Braves uniform was Eddie Mathews, who retired after the 1968 season, spent with the World Champion Detroit Tigers. 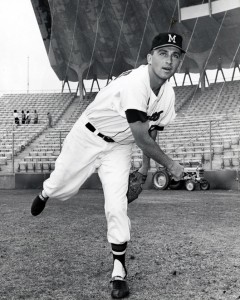 The St. Louis Browns moved to Baltimore in 1954 to become the Orioles. Among the players who made the move were pitchers Don Larsen and Bob Turley, who were traded to the Yankees in ’55. Turley won a Cy Young Award and played until 1963, but Larsen, of perfect game fame in the 1956 World Series, outdid him, continuing to pitch until 1967 when he threw his last pitch for the Chicago Cubs.

The Philadelphia Athletics moved to Kansas City in 1955, and with them went the brilliant first baseman Vic Power, who many consider the first to play the position catching balls one-handed. Power, 26, had played 127 games for the ’54 Athletics in Philly, and became an All-Star in ’55 when Major League Baseball landed in Kansas City. In 1965, he played his final game for the California Angels—and was the last Philadelphia Athletic on an active roster. In that final game, he batted against Jim Kaat, who is also a member of this unusual club, having been the last of the original Washington Senators. 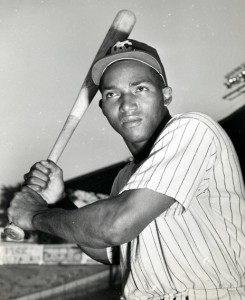 Kansas City did not hold its team for long—just 13 years—and in 1968, they were off to Oakland, where they still reside while dreaming of San Jose. A number of players who would figure in the glory days of Charlie Finley’s Oakland A’s—including Reggie Jackson, Bert Campaneris, Dick Green, Sal Bando, Joe Rudi, Catfish Hunter, and Blue Moon Odom—made the move, but the last of them to retire was Reggie, who played until 1987 when he returned to finish his career at 41 with the A’s, this time as a teammate of “Bash Brothers” Mark McGwire and Jose Canseco.

Reggie Jackson with the Athletics in 1968—the team’s first season in Oakland.

The Dodgers and Giants moved west in 1958, and we have already covered Aspromonte, but the last New York Giant was Willie Mays, who bowed out after the 1973 season, playing his final games in that year’s World Series with the New York Mets, 16 years after the Giants left town. His retirement came a year later than 49-year-old Hoyt Wilhelm’s, who pitched for the Giants through the 1956 season.

As mentioned, after the Senators became the Minnesota Twins in 1961, the “last survivor” was Kaat, who was 44 when he threw his last pitch for the St. Louis Cardinals in 1983—his 25th season. But there was a second Washington Senators franchise born in 1961, the one that became the Texas Rangers in 1972. And the last “expansion” Senator turned out to be infielder Toby Harrah, who had a 17-year career, and who, after stops with the Indians and Yankees, wound up with Texas in 1986 after playing for the original Rangers in 1972. (Harrah wore the palindromic number 11 to match his palindromic name.)

The Seattle Pilots only lasted one season—1969—and although Lou Piniella went to spring training with them and wore their uniform, and then lasted until 1984, it is shortstop Fred Stanley who gets the “official” recognition by playing in their ’69 regular season and lasting until 1982. Stanley came up in September 1969, played 17 games, and moved with the team to Milwaukee in 1970 when they hastily became the Brewers. Although only a lifetime .216 hitter, Stanley managed to play 14 years in the big leagues, including the three New York Yankees championship teams of 1976, ’77, ’78, where he was a teammate of Piniella.

When dealing with name changes (but not city changes), we turn to the Houston Colt .45’s, who became the Astros with the 1965 opening of the Astrodome. The last active player to have worn that memorable Colt .45’s jersey was Rusty Staub, who played his last game for the Mets in 1985.

We also note that one day there will be the last player to have played for the Tampa Bay Devil Rays before they dropped the Devil. That change came in 2008, so the list is still a bit long, including Dioner Navarro, Carl Crawford, B. J. Upton, Delmon Young, Ben Zobrist, Jonny Gomes, James Shields, Scott Kazmir, Ty Wigginton, and Edwin Jackson, among others, but one day one of them will be the last man standing who was a Devil Ray.

And so there it is—an exclusive club of “last men standing,” waiting for the doors to open to a few more. 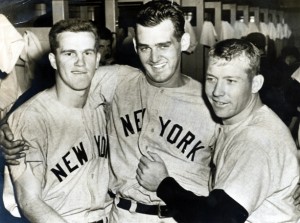 Hurler Don Larsen (center), shown here with Tony Kubek and Mickey Mantle in 1957, made his MLB debut with the St. Louis Browns in 1953. Larsen, who enjoyed a 15-year career, was the last Browns player to see action in the majors.