Marty Appel is a frequent guest speaker and moderator at baseball gatherings. A noted Yankees historian and author of 16 books, his audiences have ranged from Little League groups to gatherings of several thousand banquet attendees.

Marty has appeared at:

Accidental Yankee Fan
Appel, an “accidental Yankee fan” (“I was born in Brooklyn!”), has been cited by the New York Times as one of the nation’s premier authorities on Yankee history, and is generally acknowledged as one of baseball’s most informed historians. Indeed, a private library of more than 2000 baseball volumes is one of the largest private collections in the country.

Whitey, Mickey, Yogi, Casey
But Appel’s curiosity has cultivated his knowledge far beyond the written word. As a Yankee employee from 1968-1977, and as their television producer in the ‘80s and ‘90s, he never missed an opportunity to get to know the elders of Yankee lore – be they Lefty Gomez, Bill Dickey, Red Ruffing, Bob Shawkey, or Waite Hoyt from long ago – or his boyhood heroes like Whitey Ford, Bobby Richardson, and Elston Howard to his contemporaries like Catfish Hunter, Graig Nettles, Thurman Munson, Lou Piniella and Willie Randolph. 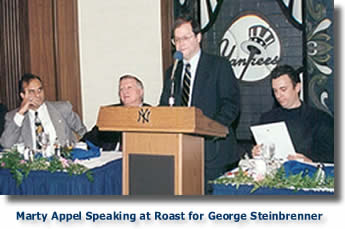 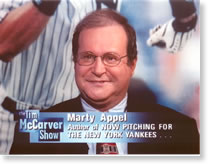 And his book, “Now Pitching for the Yankees,” an autobiographical tale of his Yankee adventures, was named the best New York baseball book of 2001 by ESPN.