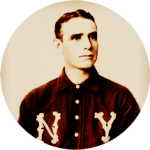 In Babe Ruth’s rookie season of 1914, he was up and down between Providence, Baltimore and Boston, but he did finish the year with the Red Sox, and he did pitch in the season finale, a meaningless 11-4 victory over Washington in Fenway Park, as the Red Sox finished second and Washington third. It was one of five appearances Ruth made for Boston that season.

But the game was a crazy one, and it also marked the final mound appearance of 44-year old Clark Griffith, who had thrown his first professional pitch in 1888 for Class A Milwaukee.

By 1914 the 5’6” Griff was in his 14th season as a manager, his third with the Senators. He had taken the mound for a single inning in both 1912 and 1913, and here, on the last day of the season, he did it again. Tom Connolly was the home plate umpire – the same man who was there for the first game ever by the New York Highlanders (Yankees) in 1903, a team managed by Griffith.

The Washington Herald reported, “Clark was inspired to do unexpected mound duty by the challenge of Tris Speaker who moved from center field to first base and ultimately to the slab from which three different pitchers had been batted before him.

“Griff pitched shutout ball, allowed only one hit and found one of Speaker’s curves for a two-sacker after Tris had called the outer guard in behind the infield.

“So many players appeared in the lineup that the exasperated baseball writers were imploring the teams for innings to call the game and all this time fielders loafed on hits…..and the spectators laughed themselves helpless over the horse play.

“The real feature of the game was [Del] Gainer’s home run drive over the left field fence, the fourth of this kind made in the history of Fenway Park.” (Fenway opened in 1912).

There was no investigative report on whether Griffith had actually signed a player contract for that day. It feels like a “no.”

In truth, Griffith’s pitching career effectively ended in 1906 with 17 games as player-manager for New York. But in his hey day, and despite his diminutive size, he was spectacular, winning over 20 games seven times – six with the 19th century Cubs, and once with the White Sox in 1901, the American League’s inaugural season. As was the style of the time, there were a lot of complete games in his ledger – 240 complete games in 252 starts with the Cubs between 1893-1900.

After he left the Highlanders in mid-season 1908, the next found himself as player-manager at Cincinnati, and from 1912-1920 as manager at Washington. In 1911 he purchased 10 percent of the team, and in 1919, with a partner, upped it to 80%. It was he who invited President Taft to throw out a first pitch on Opening Day in 1912, beginning a storied presidential tradition, which Griff personally oversaw into the Eisenhower administration. By then, his ballpark was called Griffith Stadium, and his team won pennants in 1924, 1925 and 1933. 1924 was his only world championship.

The Old Fox was selected by the Veterans Committee for the Hall of Fame in 1946. In 1951, the Yankees Old Timers’s Day was called “Clark Griffith Day”, and he was honored as the franchise’s first skipper.